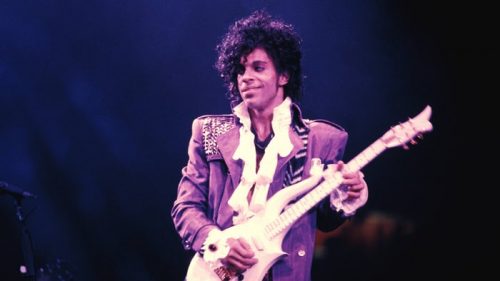 Musically, my life changed in 1984 when Prince released his Purple Rain album. Not long before, Michael Jackson’s Thriller was my undisputed favorite album of all-time—and by that I mean the first 12-13 years of my inconsequential existence.

Man, that album of Prince’s in ’84—–between his unrivaled guitar rifting, singing and implausible compositions that accompanied his songs, Prince moved me in every way someone who loves music could be moved.  Til this day I go back and forth between Michael and Prince over who was the best of the 80’s (and maybe ever).

From the opening guitar chords it was obvious this title track off the album was going to be exceptional.

Yes, I did want to be guided to the Purple Rain.

Nevermind that I didn’t know what the hell purple rain even is or meant.  The mystery… of sort that frames this song is part of the allure.  It’s clear early on he’s mourning the end of a relationship, as he literally delivers the line “it’s such a shame our friendship has to end.”  However, as the song grows deeper it seems Prince is discussing a more spiritual relationship. Maybe he’s meditating his relationship with God?   I mean, regardless of its color, rain falls from the heavens above—allegedly.

There’s never a decisive answer from Prince in the lyrics or interviews over the years about this song, at least that I’m aware of and for me that’s a function of what makes Purple Rain so magnificent.

Simply calling Purple Rain a great pop or rock song is shortsighted. Prince digs in and reaches deep into his blues and funk prowess to produce a track with penetrating sounds delivered over several layers we just can’t get enough of.

Of course the song…and album were written for Prince’s Purple Rain movie.  Personally I thought the movie was kind of whack but I digress. It doesn’t take away from how undeniably luminous Purple Rain—and others off his iconic album were.

Great Lyrics:  The written lyrics of “Honey, I know, I know, I know times are changing could never do it justice. It’s all about Prince’s brilliant belting there—something we all fruitlessly attempt to sing along with.

“Honey, I know, I know
I know times are changing
It’s time we all reach out
For something new, that means you too

Fun Facts:  Because people love to bitch and moan about nearly everything, the movie “Purple Rain” was met with criticism for having too much sexism.  In a 1985 interview with MTV, Prince was defensive.  “I didn’t write Purple Rain,” he said. “Someone else did. And it was a story, a fictional story, and should be perceived that way. Violence is something that happens in everyday life, and we were only telling a story. I wish it was looked at that way, because I don’t think anything we did was unnecessary. Sometimes, for the sake of humor, we may’ve gone overboard. And if that was the case, then I’m sorry, but it was not the intention.”  (Credit- Songfacts.com)