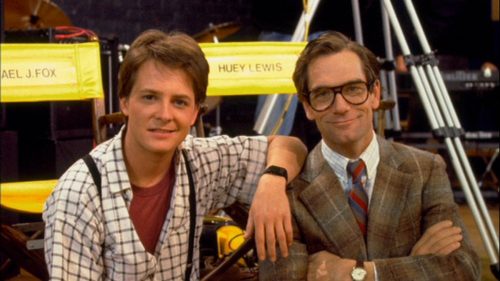 Before jumping into particulars and anecdotes about “Power of Love”, let me preface this entry by saying Huey Lewis & The News’ “Sports” album is among a tiny handful of my most cherished 80s albums.  For me anyway it rivals Michael Jackson’s “Thriller”, Prince’s “Purple Rain” and Lionel Richie’s “Can’t Slow Down” as the decade’s best LP. There’s not less than five tracks from Sports I was fanatical with then, and still enjoy regularly til this day.  It should be noted Sports has zilch to with the “Power of Love” single, as it wasn’t on the album but sorry—I’ve waited 42 spots on this countdown to talk all things Huey and couldn’t help myself.

The first of two Huey Lewis & The News songs on my countdown, “Power of Love” is a featured cut off the soundtrack from one of my favorite 80’s movies, “Back to the Future”.  Ironically the song’s placement in the movie has nothing to with love having any type of power, but rather brilliantly put in as Marty McFly’s late to school and hitches a ride via his skateboard and the back of a truck leaving Burger King before expertly catching the transfer on a jeep. It’s also in a scene where McFly auditions with his band for the school talent show but’s cut off by the panel (including Lewis making a cameo in the film) before he can actually sing a lyric.

Of course, movie or not the voice on the song is instantly recognizable, as Lewis had an unmistakably signature sound.  Plus, by his 1985 he and his group were laying the smackdown on the pop music charts, based largely on the success of “Sports”.

Like many of their 80s hits but this one in particularly, “Power of Love’ felt like a flawless blend of a paying homage to Motown mixed in with then-modern pop/rock keyboard sounds and bluesy guitar riffs.

“Power of Love” will rightfully live on in 80s pop culture as one of its greatest tracks..

Chart Success: For all its prior success, “Power of Love” became the band’s first number-one hit in the United States.  It stayed on the charts for 19 weeks.  It finished 1985 ranked 15th on the year-end Billboard Top 100.

Great Lyrics: The whole “don’t need money, don’t take fame” line has to rank among the lyrics I belted out most while playing my air guitar during the 80s.

Fun Fact: “Power of Love” was nominated for an Academy award for Best Original song in 1986. Unfortunately it lost out to Lionel Richie’s “Say You, Say Me”—recorded for the film “White Nights”.