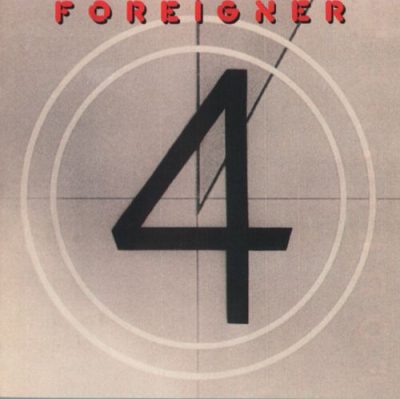 Why I Loved It: To use a wrestling term – REO Speedwagon, Foreigner, Styx, and Kansas were locked in fatal four-way to decide the early-to-mid 80’s commercial rock champions, with those last three actually touring America together. Even as a 10-11 year old I totally remember that shit! If you were around for this era and a fan of the genre, or even if you weren’t you’d hear “Urgent”, “Waiting For A Girl Like You” and “Juke Box Hero” all over the radio airwaves. Indeed, this album marked the start of Foreigner’s commercial peak. “Jukebox Hero” is easily one of the decade’s best rock guitar anthems while “Waiting For a Girl Like You” showed off Lou Gramm’s penetrating vocals and is one of my personal favorites.

“4” isn’t a historic album artistically by any means, but there’s songs on there I relished (and still do) listening to because in my mind, they impeccably captured 80’s rock music.

Fun Facts: In a Songfacts.com interview with Foreigner’s Mick Jones, he said “That stemmed from an experience that we had, I think it was in Cincinnati. We’d gone to the arena for a sound check, and it was pouring down rain, and there were a bunch of fans waiting at the door when we went in. When we came back for the show later on, all that was left was one lonely fan, a young guy waiting out there in the rain, soaked to the skin. I thought, well, he’s waiting like five hours here, maybe we’ll take him in and give him a glimpse of what happens backstage at a show. And this kid was just mesmerized with everything. I saw this look in his eyes, and I thought, he’s seeing this for the first time, he’s having this experience. And I just imagined what was going through his mind. And I’d been toying with this title, ‘Juke Box Hero,’ I thought it was almost a satire on what we did and how it was perceived from an audience level, and public. That’s how it originated.”