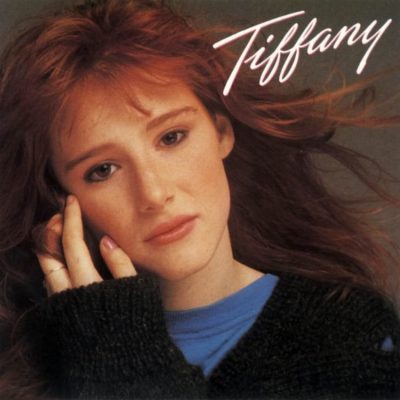 NOTABLE TRACKS:”I Think We’re Alone Now”, “Could’ve Been”, “I Saw Him Standing There”, “Feelings Of Forever”

WHY I LOVED  IT: This was, is and always will be one of my great 80s musical guilty pleasures. No teenage dude in the 80’s would fess up to be a fan of Tiffany’s music but whatever, I was all about it. In fact, this Tiffany LP was one of the last great candy pop of the 80’s I can remember, as not long after my musical affection took a sharp turn towards R&B, starting with Bobby Brown and extending into the 90’s golden age era of slow R&B jams.  Critically speaking Tiffany’s album was kind of lousy, at least if you listened to those critics, but I really don’t give a shit what they think.  The bigger, more impressive story is Tiffany being one of the bigger teenage sensations I can ever remember either then or now.  This girl took to having a mall tour to promote her record and make a name for herself—that’s some ambition right there. “I Think We’re Alone Now” is her most popular single and smash hit.  Many fans particularly young ones didn’t know the song was actually a cover made famous by Tommy James and the Shondells 20 years prior.  I liked it of course, but my personal favorite was “Could’ve  Been”, which came in at No. 40 on my Favorite 100 Songs of the 80’s countdown earlier this year. It struck an emotional chord with me like few others and it still resonates with me today. I love that song and PS—I’m not crying, you’re crying. “I Saw Him Standing There” was a Beatles cover with the title changed from her to him.  Alrighty then.  Tiffany’s album is a huge slice of glorious 80’s cheese and a deliciously sexy slice at that.  Also, I met Tiffany at an autograph signing a handful of years ago and she couldn’t have be nicer. Not only was she a talented artist but an equally nice person.  Rock on, Tiffany!

FUN FACTS:  From the ever-so-amazing Songfacts.com, here’s the story of Tiffany becoming a star and having her first smash single.  “Tiffany was just 13 years old when she started recording with producer George Tobin, who met her a year earlier and was impressed with her talent. Tobin, who owned his own studio in Los Angeles, had produced Kim Carnes (“More Love”) and Smokey Robinson (“Being With You”). He couldn’t find an appropriate manager for Tiffany, so he handled the business side of her affairs after signing her to a production deal.

Finding good, original songs is hard for an unknown singer, since the top songwriters want to place their cuts with established acts, so Tobin looked for cover songs for Tiffany, and came up with “I Think We’re Alone Now,” which she wasn’t thrilled with but recorded anyway. Tobin then shopped her to record companies, and after being turned down by Clive Davis and about a dozen others, found a taker in Steve Moir at MCA Records. Unfortunately, Moir left MCA soon after, and the company gave Tiffany little support. It became clear that she wasn’t going to succeed through traditional means, so Tobin went to the MCA “special projects” division and hatched an idea: the mall tour.

Starting in Paramus, New Jersey, the 16-year-old Tiffany toured shopping malls, singing for free to whoever would listen. It was a novel approach, and it worked very well, especially when media outlets covered the story of this teenager who sang for shoppers. The mall crowd (young girls) was a great fit for Tiffany, who found a way to reach this audience long before there was Twitter.