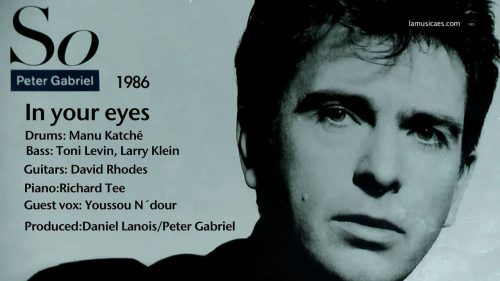 You’d be hard pressed to find a handful of things more 80s symbolic than Jon Cusak, a boom box and this jewel of a song by former Genesis front man Peter Gabriel.

Of course, I’m referring to the movie “Say Anything” in which a devastated Cusak (Lloyd Dobler) stands on the front lawn serenading his ex-squeeze Diane Court, holding a boombox over his head blasting this song. It’s indisputably one of the more iconic movie moments of the decade.

Because of that scene it’s easy to forget that Gabriel’s song was already a hit years before.  “In Your Eyes” was released in 1986, although it’s more connected with casual fans to the 1989 movie.

That sort of bothers me, as this is a pleasing record on its own.  Although Gabriel had other singles that reached higher on the charts: Sledgehammer, Shock the Monkey and Big Time— In Your Eyes was far and away my favorite.

Great Lyrics:  So many great lyrics to choose from in this song. To me it’s great from the first lyric.

Love I get so lost, sometimes
Days pass and this emptiness fills my heart
When I want to run away
I drive off in my car
But whichever way I go
I come back to the place you are