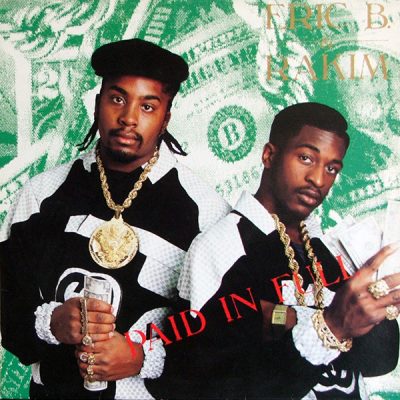 Why I Loved It:  To be honest I’m confident when I go back someday and evaluate the job I did with this countdown, this will be a selection I woefully undersold.  This is one of the greatest rap albums I’ve ever heard in my life and if you’re not convinced I truly feel that way, let me indulge with you a quick story. I vividly remember buying this cassette from Record Theater in Main Street in Buffalo, New York when I was 16 years old. For the next few weeks I played the shit out of it and at some point, quite possibly because I wore it out the film on the tape broke. The very next day I walked my ass all the way back to Record Theater and spent $9.99 or whatever it was on the same cassette again. I don’t think I’ve ever bought the same album twice before or since. I couldn’t go without having it and legitimately knew every lyric to each track on it.  Til this day I think Rakim is the best rapper who has ever lived. Nobody could touch him when it came to spitting lyrics with the flow he demonstrated.

With a superbly inimitable sound and a brilliant rapper, “Paid in Full” really bangs home how vital this album was with stretching the limits of hip hop on pretty much every track, especially one of my all-time favorite rap tunes “I Ain’t No Joke.”

Commercial Success: By typical pop music commercial standards this wasn’t an incredible successful album but rap music in general during the 80’s didn’t have the mainstream appeal it does now, so selling a million copies, as this album did meant more back in the day.  “Paid in Full” reached as high as No. 58 on the Billboard Top 200 and eight on the Black Albums chart on the strength of five singles, with three of them landing on the Hot R&B/Hip Hop Songs charts. “I Aint No Joke” reached No. 38,   “I Know You Got Soul” stalled at No. 64 and “Paid in Full” maxed out at No. 65.

Fun Facts: Courtesy of Encyclopedia.com: “It was disc jockey Eric Barrier (Eric B.) of radio station WBLS (NY) who first recognized Rakim’s talent while seeking an MC to complement his experiments with sampling in 1985. Barrier took Rakim as a protégé, and the two performed as a duo, with Barrier topping the marquee. Originally billed as Eric featuring Rakim, they recorded a single track, “Eric B. Is President,” as a demo in 1986. Zakia Records, an independent Harlem-based label, released this demo track as a two-sided single, paired with “My Melody,” that same year. In the lyrics of this early song, which became a summertime street hit, Rakim glorified the influence and power of professional MCs such as himself.

In an unfortunate footnote to its fame, Paid in Full generated a web of copyright infringement lawsuits from James Brown and Bobby Byrd, with each claiming damages resulting from the use of the recordings Barrier had sampled in the popular remixes contained on the album. Indeed, much of Barrier’s reputation and popularity rested on his talent for the remix, and some critics contended that the Eric B. & Rakim mixes were superior overall to the recordings they were taken from, including those by Brown and Byrd. Legal disputes and controversy notwithstanding, Paid in Full was certified a platinum million-seller on July 11, 1995.”