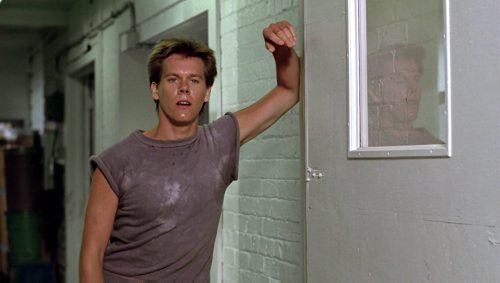 He had several others, but Footloose is the crowning achievement for Kenny Loggins— the undisputed, undefeated King of movie soundtrack hits.  How you feel about the song, released in 1984 probably varies but one thing’s assured —Loggins’ Footloose is one of the most distinguishable dance songs of the 80s, if not all-time.

Deal with it, haters.

Footloose was one of the biggest movies of the decade, and it’s difficult to even deliberate another 80s flick having a finer soundtrack.  The Footloose soundtrack had nine singles and six were Top 40 hits, including three in the Top 10: This Loggins gem, Almost Paradise (Mike Reno and Nancy Wilson) and Let’s Hear It For The Boy (Denice Williams).  That’s two-thirds of a movie soundtrack hitting the Billboard charts. Insane.

By the way, this wasn’t the even the Loggins’ only gem from the album.  He also sang I’m Free (Heaven Helps The Man); number 30 on this MoranAlytics countdown and one of those “other” three singles off the album to hit the Top 40.

Loggins also appeared at No. 93 with Danger Zone (Top Gun soundtrack) and at No. 67 with Meet Me Halfway (Over The Top soundtrack) on this countdown. Like I said—THEEEEEEE undisputed King of the movie soundtrack hit.

I’ll be the first to admit the album, including this single isn’t built on thought-chewing substance, but instead is unapologetically puffy and enjoyable.  Not always but every now and then that’s actually better than tunes soiled in never-ending contemplation.

At the very least, it’s much more fun. Such as the case with this timeless Loggins offering.  I mean, fuck everything else—just “kick off your Sunday shoes”….. and dance to this, baby.

Chart Success:  Footloose flew all the way to number-one on the Billboard Hot 100 and stayed there for three consecutive weeks before being knocked off by Phil Collin’s Against All Odds.  In total stayed on the chart for 23 weeks and finished that magical music year of 1984 ranked fourth on the year-end Billboard Hot 100.

Great Lyrics:  I don’t know about you, but for me nothing sounds more dangerous than Kenny Loggins threatening to tear up the town.

“Been working so hard
I’m punching my card
Eight hours for what?
Oh, tell me what I got
I’ve got this feeling
That time’s just holding me down
I’ll hit the ceiling
Or else I’ll tear up this town”

Fun Facts:  From Songfacts.com: “Kevin Bacon revealed to Conan O’Brien that he bribes DJ’s at weddings with cash so they won’t play the song. I go to the disc jockey and hand him $20 and say, ‘Please don’t play that song,’ he told the talk show host. “Because, first off, a wedding is really not about me. It’s about the bride and groom.”