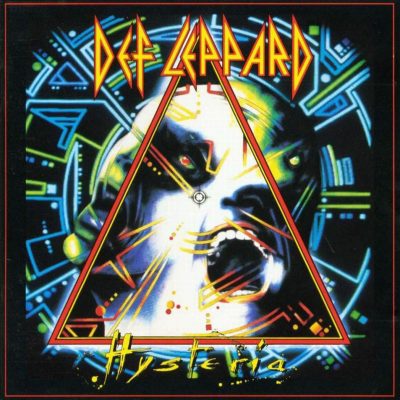 ALBUM MVP: “Pour Some Sugar On Me”

WHY I LOVED IT:  Purely for the sake of discussion let’s say you couldn’t stand this album.  Sadly for you it wouldn’t have mattered, because “Hysteria” was utterly inescapable.  Radio, music videos, jukeboxes— the album was packed with hits and played everywhere.  Fortunately I didn’t suffer the fate of wanting to flee when I heard it and enjoyed the infectiously catchy melodies to most the album’s songs. “Love Bites” was one of the most enticing rock power ballads I heard over the entire decade, in all its shrill glam vocal glory.  Of course, “Pour Some Sugar On Me” was their other monster single and today serves as the unofficial anthem for drunk white chicks who crave dancing on bars.  I know some pure rock critics didn’t like this album as they feel group by this time had transitioned from their hard rock roots to pop/glam rock.  To that I say—tough shit.  This was a good album.

FUN FACT:  The group was formed in England and originally called themselves Deaf Leppard before using Led Zepplin as the inspiration to change the spelling of the first word to Def.  Fans of the group know they suffered a few unspeakable tragedies.  Drummer Rick Allen was racing his corvette in England on New Years Eve 1984 and ended up in a car accident that resulted in him losing his left arm.  Also, seven years later guitarist Steve Clark died of a drug overdose.  Now that I think about it these aren’t really “fun facts” at all.

Here’s something that actually is fun per AXS: Def Leppard is actually in the Guinness Book of World Records for a feat that seems almost impossible to accomplish. When midnight hit on Oct. 23, 1994, Def. Leppard was already on stage playing in Tangiers, Africa. They then took off from there and flew to London, England where they performed a second show and then jumped back on the plane and flew to Vancouver, Canada for a final late night show that night. Three concerts on three continents in one day was a new world record.