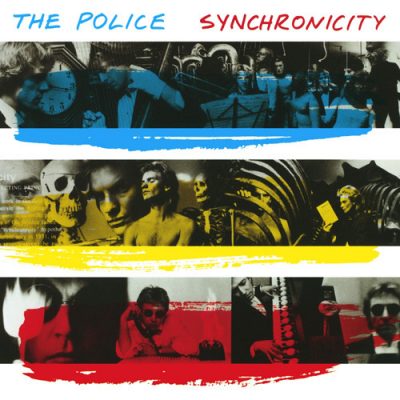 Notable Songs: “Every Breath Your Take”, “King of Pain”, “Wrapped Around Your Finger”, “Synchronicity II”, “Tea in the Sahara”

Album MVP: “Every Breath You Take”

Why I Loved It: Featuring tracks significantly more pop-friendly and investigational than Ghost in the Machine (No. 32 on this countdown) or either of their previous three albums,  Synchronicity, their fifth and final studio effort made the Police a household name in mainstream music after producing five hit singles. I was 12-years old when this album dropped and it’s one of the albums I most remember from the 80’s. In fact I had this LP, which physically having an album was a rarity for my poor ass. Great tunes saturate the majority of this album, especially the legendary “Every Breath You Take.”  “Tea in the Sahara” is a great track many 80s fans have probably never heard. There’s many albums on this countdown included on the strength of one or two songs, but this album has a solid six songs I could listen to on loop over and over again. There’s no real one song I like more than the others. Sting would go on to pursue a solo career following this album, thus ending the group. You have to wonder how many more memorable albums they could’ve made.

Commercial Success:  The Police’s final album was their most successful. Synchronicity rose to number-one on the Billboard Top 200 and remained there a staggering seven weeks, finishing both 1983 and ’84 ranked third and eighth respectively on the Billboard year-end charts.  “Every Breath You Take’ was the album’s lone number-one single on the Billboard Hot 100 and stayed there for eight straight weeks as it finished the 1983 number one on the year-end chart. “King of Pain” peaked at number-three on the Billboard Hot 100 while “Wrapped Around Your Finger” climbed as high as eight. “Synchronicity II” reached No. 16 to give the album four top twenty hits. In total Synchronicity sold more than eight millions in the United States alone, was nominated for five Grammys and won three, including the Best Rock Performance by a Group or Duo With Vocals for the album and Song of the Year for “Every Breath You Take.”

Fun Facts: From Songfacts.com: “In a 1983 interview with the New Musical Express, Sting explained: “I think it’s a nasty little song, really rather evil. It’s about jealousy and surveillance and ownership.” Regarding the common misinterpretation of the song, he added: “I think the ambiguity is intrinsic in the song however you treat it because the words are so sadistic. On one level, it’s a nice long song with the classic relative minor chords, and underneath there’s this distasteful character talking about watching every move. I enjoy that ambiguity. I watched Andy Gibb singing it with some girl on TV a couple of weeks ago, very loving, and totally misinterpreting it. (Laughter) I could still hear the words, which aren’t about love at all. I pissed myself laughing.”