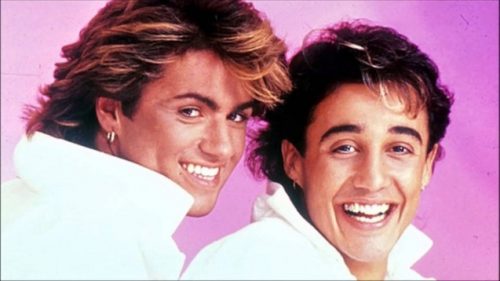 Alright, people.  Not every song needs to be about lost love, making love, world peace, imperative social issues or scorned revenge to be a classic tune.  Every now and then it’s alright to simply say what the fuck ever, and have a little joy in your life.

Wake Me Up Before You Go-Go may be the most innocently fun song of the 1980s, and I’m not at all embarrassed to confess it’s a tune I loved hearing and dancing to.

The story of how the song came about is sort of fascinating. As legend goes, Andrew Ridgely (the “other” singer in the group AKA not George Michael) lived at home with his parents even after Wham established themselves in the U.K. because he was always one the road, and also maybe too cheap to get his own place.  One morning Ridgely needed an early wake up call so he left a note for his mother asking to “wake me up up.”  After realizing he accidently duplicated the word up, he intentionally did the same with the last line of his note, which read “before you go go.”  George Michael saw the note, found it funny and sure enough , it eventually became their first signature hit in America.

It’s fluff—great fluff during an era that was dominated by just about every other type of music on the radio. Far as I’m concerned, Wake Me Up Before You Go-Go is uncontrollably affable and so happy-go-lucky it’s for all intents and purposes, a tune impractical to hate.

If you had the record (and I did) here’s the bonus— the B side is a completely unnecessary instrumental version.  Keep that dance party going, baby!

Here’s the bad news—even if you don’t like the song, once you hear it you simply can’t extricate it from your mind.  Cynics feel this song tormented an entire generation. I feel like those cynics are assholes.

This may be the happiest song that’s ever been made.  Just embrace the damn thing!

Chart Success:  This went all the way to the top of the Billboard Hot 100, because why wouldn’t it? It remained number-one for three weeks before getting knocked off by Hall and Oates’ “Out of Touch.”  It spent 24 weeks on the chart and finished 1985 third on the year-end Billboard Hot 100 (more on the number one song that year later in this countdown).

Great Lyrics:  If you want to hate a song with the lyrics talking about the “boom boom” into your heart, then maybe you don’t have a heart at all.

“You put the boom boom into my heart,
You send my soul sky high when your lovin’ starts.
Jitterbug into my brain,
Goes bang bang bang till my feet do the same.

But something’s bugging me
Something ain’t right
My best friend told me
Where you were last night.”

Fun Facts: Wake Me Up Before You Go-Go has been a favorite on many movie soundtracks. Those include The Wedding Singer, Charlie’s Angels, Zoolander (1 and 2), Talladega Nights, Heartbreaker, Happy Feet 2 and Sausage Party.