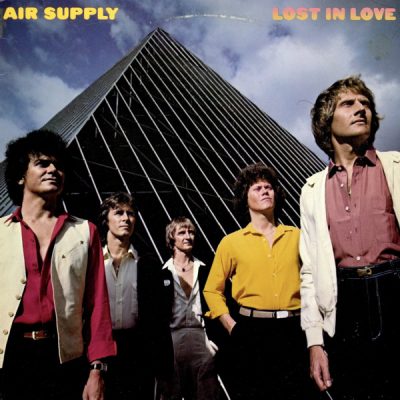 NOTABLE TRACKS: “Lost In Love”, “Every Woman in the World”, “All Out of Love”

ALBUM MVP: “All Out of Love”

WHY I LOVED IT: When i was a youngster—like really young (I was but nine when this came out), I inexplicably liked Air Supply songs from this album more than any pre-adolescent male ever should. I can’t give you any legit rhyme or reason. Maybe I was just a huge pusswad at an early age or something, but I loved “Lost in Love” “All Out of Love” and “Every Woman in the World” long before doing so was fashionable.

You see, in this day and age it’s cool to know Air Supply lyrics and sing along loud and proud. In fact, I’m pretty confident chicks dig that. Doing so in the early 80’s however probably would’ve landed you on the disabled list with an ass whupping.

For the record this isn’t even the lone Air Supply album to hit my countdown so never question the authenticity of my fandom.

COMMERCIAL SUCCESS:  This was their fifth studio album and also the best, if nothing else putting them on the map in the United States after four albums most casual fans never ever heard of.  “Lost in Love” eventually sold three million copies, mostly on the strength of three singles to land on the top five of the charts. “All out of Love” came to th closet to being a chart topper, reaching number-two on the Billboard Hot 100, having is path to the top blocked by Dianna Ross’ “Upside Down” and Queen’s “Another One Bites the Dust.” The song has been featured in several TV shows and movies, including Van Wilder, The Wedding Date, Family Guy and The Office.  The title track “Lost in Love” rose to three on the Billboard Hot 100 while “Every Woman in the World” maxed out at five.  While Air Supply to date has never had a number-one single, this album produced three of their eight Top 5 hits.

FUN FACTS:  Want to know how Air Supply got together? Here’s a blurb from classicbands.com: “Englishman Graham Russell and Australian Russell Hitchcock met as cast members in the stage production Jesus Christ Superstar in April of 1975. Their similar passion for music led Graham to share the songs he had written with Russell and a quest to follow their dreams had begun. Playing at local pubs for next to nothing, Graham and Russell found that the crowds were very receptive to their style of Soft Rock ballads. In 1976, the stage production ended and, as a duo calling themselves Air Supply they released a single that met with modest success in Australia. Devoting their full time energy to the music business, the pair recorded an album in 1977 called “Love and Other Bruises”, and the single of the same name reached #2 on the Australian charts. The follow up, “Empty Pages” went to #18. An invitation soon came for Air Supply to tour Australia, Canada and the U.S. with Rod Stewart. Later in 1977, the album “The Whole Thing Started” was released and the song “Do What You Do” reached #16 on the Australian charts. Air Supply was an eye opener to the music industry. No promotions, no professional training, but yet a success. The exposure the two got while opening for Rod Stewart gave Air Supply international attention, and after the tour ended and Air Supply returned to Australia, Graham and Russell’s urgent desire was to get back to the U.S.”