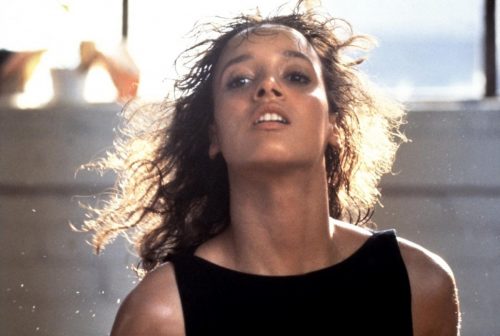 Look, man—I’m not going to waste my time disagreeing with you that Michael Sembello’s 1983 hit “Maniac” is a pretty foolish song. There’s no denying it’s wonderful cheesiness.  Does it really matter anyway?   Schindler’s List and Forrest Gump are brilliantly written cinematic masterpieces, but that doesn’t make Dumb and Dumber any less enjoyable.

Get off your soap box, dude.

I loved “Maniac”, though to be fair probably more so for the video than the track itself.  Back during the rise of the MTV generation music videos were often as important, and occasionally more so than the actual record.  The song was alright to me, but the accompanying video in it had me obsessed.  Thank you, Marine Johan (who?!?!).

The second single from the Flashdance soundtrack on my list (Irene Cara came in at No. 66 earlier), I’ll repeat much of what I said when describing Cara’s hit. I was totally into watching Jennifer Beals boogie and the video for “Maniac” was pretty much a non-stop montage of what appeared to Beals dancing.

The funniest part about the song’s inclusion in 80s pop culture lore is that it was sent to Paramount Pictures by Sembello’s wife accidently.  The lyrics originally were inspired by a tiny budget horror movie sharing the same title as the song. The studio liked the song and wanted to use it but had Sembello change the lyrics to reflect a woman being a maniac on a dance floor, as opposed to a knife wielding psychopath.

“Maniac” along Oliva Newton John’s “Physical” (more on that song soon enough) essentially became anthems at fitness classes.  I may have gotten my exercise on to “Maniac” a time or two myself.

Chart Success: “Maniac” was one of the biggest hits of 1983—reaching number-one on the Billboard Top 100 and stayed at the top for two weeks in September before being knocked off by Billy Joel’s “Tell Her About It.”  The song spent 22 weeks on the charts and finished ’83 ninth on the year-end Billboard Top 100.

She’s a maniac, maniac on the floor
And she’s dancing like she’s never danced before”

Fun Fact: The video for “Maniac” made music video history, becoming the first song ever to have its accompanying video feature scenes from the movie exclusively. In that way it was a pioneer in the music video game. The downside, at least for Sembello is as a result (plus being a one hit wonder) I never even knew what the dude looked like.