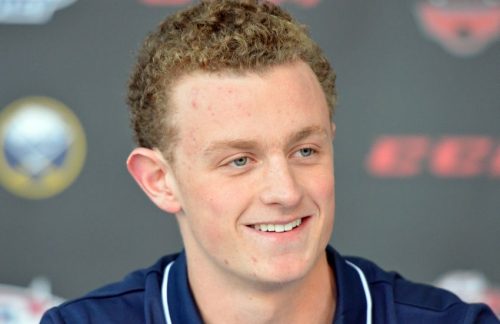 Jack Eichel can’t even legally go to a bar (in the United States anyway) and buy a round of drinks for his boys, so I guess he’ll need to find another way to celebrate after signing a Buffalo Sabres franchise-record eight year, $80-million contract extension.

Hopefully this permanently ends any idiotic budding conspiracy whispers that Eichel had no interest in committing to Buffalo long term so that he could one day get the opportunity to play for his hometown Boston Bruins.

As of this posting Eichel hasn’t officially been name captain, but that’s sure to come. This organization isn’t paying him $10 million per year to just be one of the boys.  However, general manager Jason Botterill did inform the media today that for the time being the team will not be naming a captain.

It’s hard not to be excited about the Sabres present and future with the 20-year as the face of the franchise. After suffering a nasty ankle injury on the eve of the opener last season that forced himto miss 20 games, Eichel returned and scored 24 goals and 57 points in 61 games.  His 0.93 points per game ranked 14th in the league; impressive for a second-year player who missed six weeks of game action and also endured an endless merry-go-round of line mates.

The Sabres open the season tomorrow night at home against Montreal.

(EDITOR’s NOTE: I have a Sabres page on my MoranAlytics blog but literally haven’t posted on them once. That will change going forward, especially with the season starting tomorrow. I’ll be recapping most games, previewing some others and offering commentary on team matters when I see fit.  Hopefully I can do it a little creatively so that it’s not the same as everything else.

Try to contain your enthusiasm.)