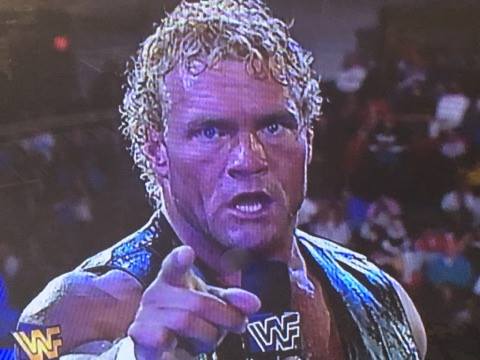 I started with episode 100 in my first recap and this is the fourth in my weekly series—where we arrive in March of 1997, just 13 days before Wrestlemania 13.

−WWF Champion Sycho Sid in the ring with Jim Ross.  He apparently doesn’t trust his reluctant tag team partner tonight, the Undertaker.  Taker comes out and they have a promo for their upcoming match at Wrestlemania 13 in less than two weeks. This brings out Paul Bearer (a heel who had turned on Taker and aligned himself with Mankind) along with Mankind and Vader.  Sid/Taker clear the ring and stare each other down.

−Pre-most electrifying man in sports entertainment era Intercontinental champ Rocky Maivia easily defeats a jobber named Tony Roy with a flying bodypress from the top rope.  During the match The Iron Sheik and Bob Backlund are on the stage yelling at Maivia, with Backlund saying “they’re going to procure the Intercontinental championship at Wrestlemania”. Immediately following the match the Sultan attacks Maivia from behind, but the champ fights him.

−During the match, an amazon looking woman is escorted from the arena by security after being spotted because she had been interfering in previous recent matches, including entering the ring to challenge Bret Hart the week prior.  This  unnamed woman at the time would be formally introduced as “Chyna” the following week.

−Ahmed Johnson defeated jobber Roy Raymond with his “Pearl River Plunge” finisher.  During the match the Nation of Domination (again, pre-Rock era) is on stage and both sides talk a lot of heated shit to each other, including racial talk that wouldn’t fly in today’s wrestling world.  The Road Warriors eventually appear from the crowd to have Johnson’s back.

−ECW’s Taz is at ringside to call out Jerry Lawler. The two grapple and Sabu appears in the ring and flies from it towards them, but misses and takes himself out.  Other ECW stars out to contain Taz including Paul (Heyman) E. Dangerously, Tommy Dreamer and the Sandman.

−Ken Shamrock in the ring with Ross.  It’s announced he’ll be the special guest referee for Bret Hart vs. Steve Austin submission match at Wrestlemania. Austin appears on the Titantron and runs Shamrock down. Hart, barely still a face, comes to the ring complaining about how much he’s been screwed over by everybody. He threatens Shamrock to not join in on the screw party. Austin comes to the ramp for a stare down.

−Goldust defeated jobber Tim McNeedy.  Mystery woman from earlier, now with Hunter Hearst Helmsley were at the top of the stage before HHH disappears. After the match the woman makes her way down with the distraction, allowing Helmsley to attack Goldust from behind.

−A debate in the ring between Lawler and Paul E. Dangerously. It quickly devolves into a legit shoot. Several ECW stars come to the ring. Lawler calls out WWF guys and no one shows up. He leaves.  Uhh, Ok.

−Mankind and Vader beat Sycho Sid and the Undertaker when Vader pins Taker after Sid hits his partner with a powerbomb.

♦ Sid was one of the more substandard main event level wrestlers I remember. He had the look of an unbeatable monster, but his inability to deliver a coherent promo is renowned and I simply couldn’t get invested in his programs. He’d go onto to main event Wrestlemania two weeks later as champion before losing to the Undertaker. Not long after that he’d return to WWF as a face, but was gone (for good) by summer after needing neck surgery.  He could’ve been so much more than he was.

♦ I still get amazed at watch the Undertaker back in these days. Not only did he carry the company on his shoulders but was an incredible athlete for a big man. There’s a spot where he flew in the air over the top rope onto Vader & Mankind like he was a freegin’ cruiserweight! Young fans who only know Taker as the legend showing up near Wrestlemania season each year need to hit the WWE Network.

♦ Although he wasn’t a heel quite yet Hart had some quality work on the mic in complaining about everyone calling him a complainer. You clearly see the seeds being planted to the legendary double turn between he and Austin a few weeks later at Wrestlemania.

♦ Scripted TV show or not you could see the true hate Lawler and Heyman had for each other through the screen. I mean, they really loathed each other.

♦ Still in the era where the majority of matches feature superstars against jobbers. This Raw featured five of them.

♦ To recap what episode No. 200 had for us—it featured The Rock while still a good guy fans couldn’t care less about, Triple-H before he was a next level star, a nameless Chyna before she was officially a WWF superstar, JBL as Blackjack Bradshaw and sporting a gorgeous Tom Selleck mustache, future Hall of Famer Rikishi as the Sultan, Billy Gunn in singles action, Ken Shamrock shortly before he started wrestling and Al Snow in action as Leif Cassidy.

MORANALYTICS GRADE: (B) This was a pretty good show during a nice table-setting time for WWF. I’m talking quality of program and not necessarily ratings.  Austin was soon set to explode as the biggest WWF superstar, Helmsley wasn’t all that far behind and of course was Maivia, who’d soon turn heel, join the Nation of Domination and forever become The Rock.