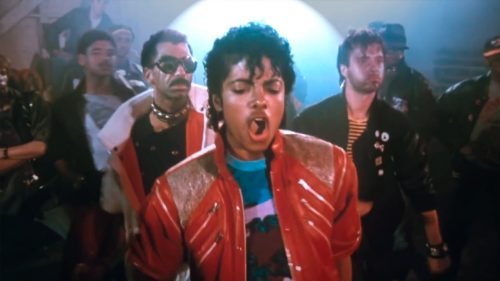 I don’t know about you guys, but for me nothing facilitates homicide-thirsty adversarial gangs coming together to form a bond more than the art of dancing to Eddie Van Halen guitar riffs and the King of Pop vocals on a momentous record.

Like every wannabe Michael Jackson fanatic out there in the 80s, I owned a multi-zippered red leather jacket, though in the interest of full disclosure my version was less affectionately known as pleather—thanks for nothing, mom.

Why wouldn’t I want that jacket? Michael Jackson was God to many pop music fans in the 80s, including this one on the strength of immortal jams like Beat It.  The third single from Jackson’s iconic Thriller album, Beat It became a dancing rock classic for an entire generation.

Back in those days Jackson yearned to pen a pop song fused with a rock edge that would appeal to kids and young adults while encompassing a premise that violence isn’t cool.  Jackson’s team were ultimately successful in enlisting Eddie Van Halen to play on it and the renowned guitarist provided riffs and a lengthy solo that took Beat it to a whole other level.

Van Halen’s vibe on the strings needed no introduction as the backdrop to Jackson’s impeccable vocals, and it pooled for one of the more iconic pop/rock songs of this or any generation.

As great as the record was on its own, the accompanying music video was arguably even more historic.  The idea that gangs would meet up and dance their issues away rather than stab each other was silly as held, but ultimately incredibly effective in being presented as a West Story type of theme. For the record, there were actually real gang members from both the Crips and Bloods in the background of the group dance sequences.

Beat It played a substantial role in helping break down MTV’s lack of playing videos by black artists during that time.  That’s largely because unlike most Jackson songs that were exclusively focused on dance or love, Beat It had an undeniable rock vibe that fit directly into MTV’s lane.

Simply put, it’s one of the biggest crossover hits of all-time—the transformation of a musician at the unadulterated pinnacle of what became the Michael Jackson phenomenon.

Chart Success: Beat It reached number-one on the Billboard Hot 100 and stayed at the top before three weeks before being overtaken by David Bowie’s Let’s Dance. It totaled 25 weeks on the charts and finished 1985 fifth on the year-end Billboard Hot 100.

Great Lyrics: We all know the strength of Beat It isn’t built on great lyrics, but they’re still fun anyway.

“They told him don’t you ever come around here
Don’t want to see your face, you better disappear
The fire’s in their eyes and their words are really clear
So beat it, just beat it

Fun Fact: Where else would I go to find you a fun fact about this song other than Songfacts.com? Here is something, courtesy of their site that I had no idea about until now, sad considering I loved the group.  “Members of the group Toto played on this: Steve Lukather on lead guitar, Steve Porcaro on synthesizer, and Jeff Porcaro on drums. These guys were seasoned studio pros and had the hot sound – the album Toto IV was one of the best sellers of 1982.”