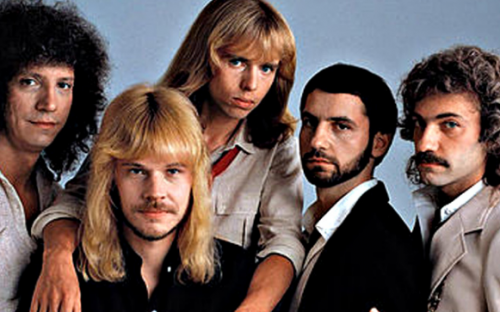 Spoiler alert— while I was/am a big fan of Styx, this is their lone song on my countdown.  Truth be told my favorite three tunes from the band are “Babe”, “Come Sail Away” and “Lady”.  However, all three are from the 70s.

While in general I wasn’t a huge fan of rock bands in the early 80s, Styx’s Paradise Theater album was part of my collection and one of my early youth favorites.  I seriously had the needle playing on that LP ad nauseam.

From it, this song emerged as my single of choice primarily for two reasons.

One was the unforgettable baseline at the beginning and throughout the song. The other was a kick-ass video of a dude sitting at a bar drinking and chatting his life away. I’m not quite sure why as an 11-year old I found it so captivating but I certainly did. Maybe I knew then I was looking into my own future.

In a 2016 interview for the band’s website, band guitarist Tommy Shaw describes the making of the song.

“There was a place near where I lived in Niles, Michigan, a little tavern right next door to the Catholic church,” Shaw said. “I don’t know if there’s some kind of law against having a bar next door to a Catholic church — maybe it was grandfathered in before the church came in there. I think officially it was called Mark’s Tavern, but everybody called it Mark’s Bar. It was the local watering hole.

The drinks were good, and the drinks were cheap. You could go in there with 20 bucks and be a hero, you know — buying rounds of drinks. And you’d always run into somebody you knew in there.

That was the basis of the song. It’s one of my favorite kind of songs. It had written itself before I got to it.”

Great Lyrics: Spending two decades working behind a bar, I’ve seen plenty of these guys.  Hell, I may be one myself.

“Sitting on this barstool talking like a damn fool
Got the twelve o’clock news blues
And I’ve given up hope on the afternoon soaps
And a bottle of cold brew
Is it any wonder I’m not crazy? Is it any wonder I’m sane at all
Well I’m so tired of losing- I got nothing to do and all day to do it
I go out cruisin’ but I’ve no place to go and all night to get there”

Fun Fact: This wasn’t even close to being Styx’s biggest chart topper.  The group had four top-three hits, including their lone number-one (Babe) and seven overall top ten hits.