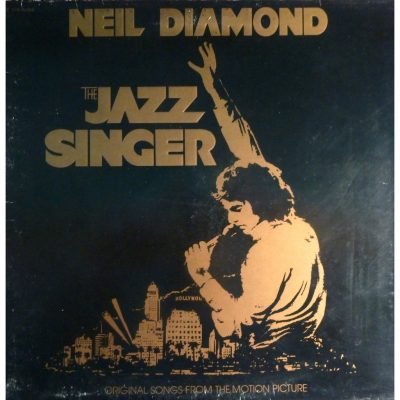 Why I Loved It: I have no doubt this selection is far higher than most would have, if they even included this at all. I can feel the criticism before even hitting send on this post.  Fortunately, this is my countdown and not yours. Honestly, I never had much of a choice when it came to liking Neil Diamond. Both my parents were huge Neil Diamond fans and as a young kid his music was constantly shoved down my throat, so at the very least I knew all his songs. I was just nine years old when The Jazz Singer came out (I’m talking about the movie here) and I have no idea why I’d watch a flick about a New York City guy torn between his Jewish traditions and being a pop music star, but I did—and I liked it.  Well, that’s not true.

The movie sucked and was stupid but I found myself loving the soundtrack, far more than any nine-year old should. I’m not sure the tracks were love at first sight,  but they definitely started to grow on me.

It’s not like I was limited in how often I heard it because my father obviously had the album. Ironically as I grew older I felt like Diamond’s vibe was usually a bit smug for my liking but his tracks on The Jazz Singer were authentic, and that’s because it’s a beautiful album featuring a trio of jewels that helped define Diamond’s legacy. “Hello Again” became one of my favorite slow songs ever and who doesn’t singing along to “Love on the Rocks” and especially “America”? This is a GREAT album—one 80’s aficionados don’t give enough respect to.