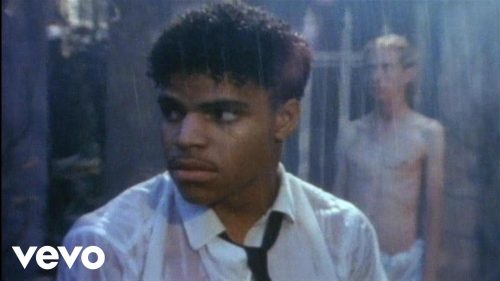 If you ever needed evidence Michael Jackson had the ability to make everything better, look no further than Rockwell’s Somebody Watching Me, which except for Jackson slaying the chorus is otherwise at best a novelty song—and that’s a generous assessment.

I really don’t care about Rockwell when it comes to music, although the story behind the stage name is in itself interesting.  Rockwell is actually Kennedy Gordy, son of the arguably the most famous record producer of all-time, Motown founder Barry Gordy.  As the story goes the elder Gordy didn’t have the best relationship with his son nor was he the biggest fan of him as a recording artist, but got excited when he heard the demo for Somebody’s Watching Me, done with the help of Motown producer Margaret Norton.

For the record, Motown that came up with the stage name Rockwell for his the younger Gordy—as they thought the rising fame of Madonna and Prince while having one name was a factor. Reportedly, the inspiration came when someone at Motown saw a Norman Rockwell painting.

Anyway, it’s never been officially confirmed what convinced Jackson to lead his famous vocals to the song.  Maybe it Rockwell’s sister being married to Michael’s brother, Jermaine.  Perhaps Barry had some sort of sensational blackmail on Jackson.  Maybe Michael was simply a swell guy trying to help out his fellow man. Who knows, really.

Regardless of reason, when the guy who runs Motown can convince literally the biggest star on earth at the time to lend his voice to the chorus, it was obvious the song was destined to become a big hit.

Many consider Somebody’s Watching Me a cliché’ 80’s song and I certainly won’t argue the point.  For me the verses are corny, even by the decade’s cheesy pop standards, and the music is weird. It matters not— as Jackson’s handling of the chorus is so freegin awesome.  I’m not sure how many two liners from 80s music are more decipherable than Jackson’s “I always feel like somebody’s watching me.”

Jackson nudges a mediocre song towards elite status for his repetitive two-line delivery alone. I sort of feel bad giving Michael all the credit and Rockwell none but sorry man—it is what it is.

Chart Success:  This song rose all the way to number-two on the Billboard Hot 100, which considering 1984 was arguably the most packed year in pop music history is no small feat. It stayed on the charts for 19 weeks and finished ’84 ranked 26th on the year-end Billboard Hot 100.

Great Lyrics:  I can’t even forge excitement at any lyric from this song. They’re mostly inane.  Fortunately this isn’t a lyrically driven tune.

I work from nine to five; hey hell, I pay the price.

All I want is to be left alone in my average home;

But why do I always feel like I’m in the Twilight Zone, and

Tell me is it just a dream”

Fun Facts:  I’m going to assume that Rockwell didn’t take himself nor the song serious with the accompanying music video.  That’s a good thing, because courtesy of Wiki here’s the video plot description:  “The video opens with Rockwell coming home to discover that the wrong newspaper has been delivered to his doorstep. As he takes a quick shower, he begins to have strange visions (in a manner recalling The Dead Zone) of himself being pursued around his house by assorted ghoulish appartions, of the looming figure of a cadaverous-looking man, and of finding a tombstone engraved with his own name. His shower is interrupted when he hears something outside and goes out on his balcony to investigate. He is shocked to see the man from his visions standing at his gate, but as he struggles to get a better look in spite of the sun in his face he is greatly relieved to see that he is merely a mailman, come to deliver the correct newspaper. As the mailman walks up the path towards the front porch, however, a brief close-up of his arm reveals that he is, in fact, a zombie. Rockwell emerges onto the porch to receive the paper, which the mailman genially hands over. As the mailman brings his other arm around to strike, Rockwell has just enough time to notice that he is not human.”