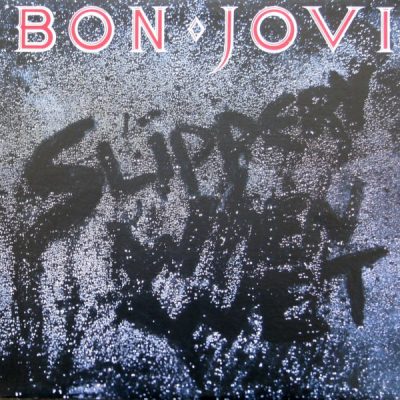 Notable Songs: “You Give Love a Bad Name”, “Livin’ on a Prayer”, ‘Wanted Dead or Alive”, “Never Say Goodbye”

Album MVP: “Livin’ on a Prayer”

Why I Loved It: I can’t tell you how much I want to loathe Bon Jovi.  Today it’s quite easy, especially if you’re a Buffalo Bills fan.  However, it wasn’t so easy back in the 80’s and if I’m being completely honest with everyone, I really liked Slippery When Wet. God, I hate admitting that! It is what it is tho, and this was a great album. Slippery When Wet wasn’t just a revolutionary album for big haired boys from New Jersey; it was a huge development for hard rock music as a whole, serving as the unofficial beginning of the genre entering the heart of mainstream music.  Slippery When Wet bestowed a mixture of hard rock, traditional rock and even candy rock (sorry but it’s true) that universally attracted fans of all kinds and particularly girls, which hard rock wasn’t geared to at the time.  Obviously that shit changed with this group and album. As a teenager I remember chicks losing their God damn minds over Bon Jovi and if you wanted any chance of hooking up you better find a way to like Bon Jovi.  Perhaps the thing I grudgingly respect most about Bon Jovi and this album in particular is that it was geared towards having more commercial than critical success and the band didn’t really try to hide it either. “You Give Love a Bad Name” and “Livin’ on a Prayer” are two of the biggest rugged teeny bopper anthems of all-time, whether it’s 1987 or 2017. I still feel like pretty much each Bon Jovi album before and since basically sound the same, but there’s denying this effort set the pace for numerous hard rock albums that hit shelves soon after for the remainder of the decade.

Fun Facts: From Thisdayinmusic.com Jon Bon Jovi was interviewed and among the topics was the process of “Livin’ on a Prayer.” He said the following:

“I am really proud of that one, because it goes back to the storytelling roots that I was talking about. It deals with the way that two kids – Tommy and Gina – face life’s struggles, and how their love and ambitions get them through the bad times. It’s working class, and it’s real. That’s what most of our fans can relate to, not the limos and groupies. That’s where I still find my heart.

I wanted to incorporate the movie element, and tell a story about people I knew. So, instead of doing what I did on Runaway, where the girl didn’t have a name, I gave them names, which gave them identity. I wanted to relate those stories to people I’d gone to high school with. Some got married right out of high school. Some joined the service, and now were working somewhere. I wanted to tell their stories, because they could’ve been me, if I hadn’t learned to play guitar. Tommy and Gina aren’t two specific people – they represent a lifestyle.’

As a songwriter I’ve been hugely influenced by someone like Tom Waits, thanks to his cinematic approach. Elvis Costello was another, and storytellers like Paul Simon. Elton John was a big influence when I was a kid, because of Goodbye Yellow Brick Road and Captain Fantastic And The Brown Dirt Cowboy.”