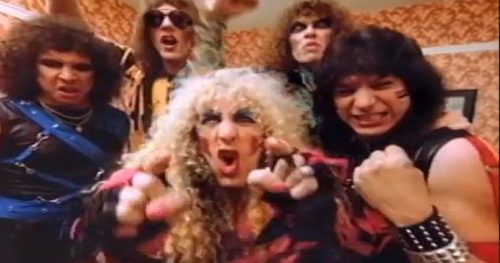 If nothing else, “We’re Not Going To Take It” was far and away my preferred anti-authority song of the 80s.  Whether it was my father, a neighborhood bully, bothersome math teacher or grammar school principal whose hobbies included taking a paddle to my ass, this mantra reminded my 13-year old self that I wasn’t going take shit from anyone—at least for the duration of this 3 minute, 38 second the song lasted.

Truthfully, I wasn’t a big fan of hard rock in the 80s. I was more a Michael Jackson, Culture Club, Huey Lewis (and the News), Hall & Oates or just about anything else that was pop type of kid.  Yeah, I know that’s pretty corny.  Get over yourself, tough guy.

I had plenty of appreciation for rock bands like Styx, Journey and REO Speedwagon but not so much for rock hair bands such as Motley Crue, Poison, Whitesnake, Warrant and Bon Jovi among others.

That includes Twister Sister—except for this song.

This song would always get me fired up (still does) and I recollect continuously blasting it in my bedroom, I’m assuming much to the dismay of my Elvis Presley supporting parents.

“We’re Not Going To Take It” shattered the glass of mainstream due to the rebellious message it contained. I recall it as a fixture at sporting events and protest rallies.

Beyond the song, the video is one of my absolute favorites of all-time. “Animal House” was one of the first dirty movies I’d ever seen, so I immediately recognized the bitter man in the video as Neidermeyer. The diatribe on his guitar playing loving son was dialogue I learned word for word and echoed throughout my teen years over and over (and over) again.

Chart Success:  It had moderate success commercially, reaching No. 20 on the Billboard Top 100 in the United States. It was much more popular in Canada—reaching number-five on the Top Singles chart and finishing 1984 at the 43rd biggest single.

What kind of man are you?

You do nothing, you are nothing.

You sit all day and play that sick, repulsive, electic twanger.

I carried an M16 and you, you, carry that that that guitar!

Who are you? Where do you come from?

Are you listening to me!!!

What do you wanna do with your life?

Fun Fact: Twisted Sister, like many other bands of the era truly benefited from the rise of MTV.  With this song and “I Wanna Rock” in heavy MTV rotation, it seemed like Twisted Sister were overnight superstars, they’d had already been playing together as a band for 10 years and built up a cult-like following in New York City.