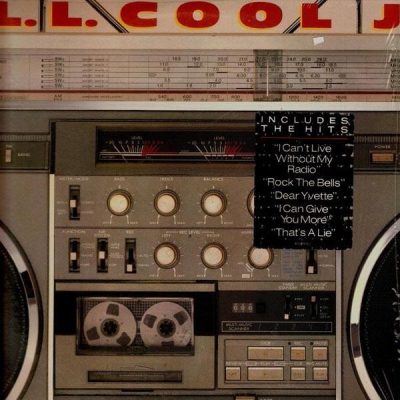 WHY I LOVED IT: I’m not sure if Radio is the first truly great hip-hop album that enjoyed commercial success but it’s certainly one of them.  LL Cool J was the first rapper I can remember to master the art of talking shit about others while bradding about himself on his records. Forget the fancy beats and gimmicks today’s rap fans have become accustomed to— with Radio you’ll find nothing other than drums and a non-stop hammering bass and I love the album for it. LL’s first studio effort was fresher than any other hip hop album that preceded it. “Rock The Bells” sparked one of the era’s great rivalries between LL and MC Shan, who accused Cool J of stealing his beats with his rap jam “Beat Biter.”

Pop culture doesn’t get to enjoy rap music like this anymore and it makes me sad. If you’re making a collection of the genre’s essential rap albums, you’re a fool if this isn’t high on your list.

COMMERCIAL SUCCESS: Throughout his illustrious rap career LL Cool J has released 13 full studio albums. “Radio” was his very first, released in 1985 when he was just 17 years old. By rap standards back in those days it was a commercial success, ultimately selling more than a million copies and becoming one of the early rap albums to land on the Billboard Top 200, peaking at No. 46 and six on the Billboard Top R&B/Hip Hop Albums.  “I Can’t Live Without My Radio” reached as high as No. 15 on the Billboard Hot R&B/Hip Hop tracks and made it to 12 on VH1’s Greatest Songs of Hip Hop (thanks for that nugget, Wiki). “You’ll Rock” charted at No. 59 on the Billboard Hot R&B/Hip Hop tracks. “Rock The Bells” didn’t end up on any charts but’s one of the more respected 80’s jams in the rap community.

FUN FACTS:  In a 2015 interview with Variety magazine LL Cool J discussed his album Radio on its 30th anniversary, saying “You know, with a lot of those beats I was actually telling Rick (Rubin) what to play. I’d go, (beat-boxes), like for ‘Rock the Bells’ and a few others. And some other times he would just completely surprise me, like with ‘I Need a Beat’ or ‘I Can’t Live Without My Radio.’ It was a real collaborative time. Sometimes we would do a rough demo, then he’d go back and mess with things and play it back for me over the phone, and I’d just be going crazy. His production ideas, he was just taking things to a whole new level.”