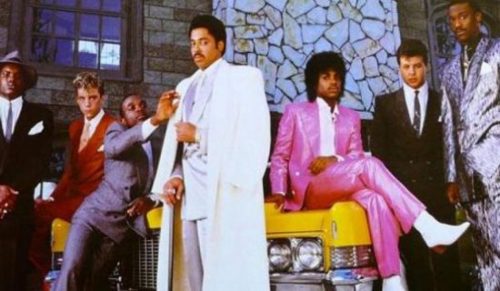 If there’s a noise that lets you know the funk is coming more prominently than the animal sounds preceding “Jungle Love’, I’ve yet to hear it.

The best non-Prince song from the movie Purple Rain that ever lived, (Morris Day &) The Time made “Jungle Love” a must have for every party in 1984 and each year since.

Written by Day, Jesse Johnson and Prince (of course), the song encompassed that poignant Minneapolis sound from where the group was from.

What exactly is that sound? Look no further than Wiki’s description.

“”Jungle Love” is a funk-pop offering relying mainly on bass, analog synthesizer and drum machines, although there are elements of new wave keyboards and a rock guitar solo, allowing the song to cross musical boundaries. Added to this are animalistic sound effects by Day and sexual lyrics.”

If you say so—all I know is this song was and is still my jam.  Where’s Jerome and that mirror?
Chart Success: Perhaps because the United States was filled with haters in 1984 “Jungle Love” only peaked at No. 20 on the Billboard Hot 100. It remained on the charts for 25 weeks but didn’t make the Billboard year-end Top 100. #Bullshit

Fun Fact: Pieced together by Prince, the band included Jimmy “Jam” Harris and Terry Lewis. While the pair didn’t reach fame in the band they would go on to become one of the biggest R&B/Pop songwriting teams in music history.  They’ve written songs for Janet Jackson (a pile of them to be exact), New Edition, Mary J. Blige, Boyz II Men, Beyonce and Usher among several others.