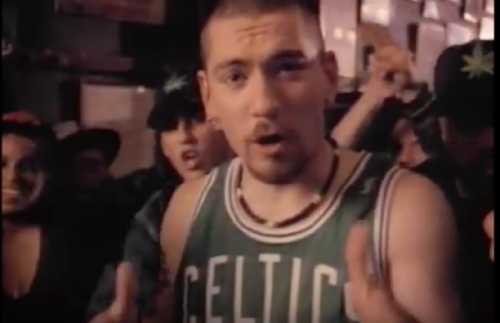 My 90’s countdown begins with the unofficial anthem for drunk white people looking to get rowdy at bar—doubly so if your Irish and own a Larry Bird jersey.  “Jump Around” hasn’t been confined to pubs, parties and sports arena moments either—it’s also been featured in several mainstream movies; including Happy Gilmore, Mrs. Doubtfire and Black Hawk Down.

Jokes about my fellow Irish and white people aside, “Jump Around” is unequivocally one of the ultimate party anthem jams of the decade.

That’s not to suggest “Jump Around’ oozed with substance. In fact, in a 2012 interview with Spin magazine group member Danny Boy described their hit by saying “It’s the kind of shit you can put a lampshade on your head and act an idiot to.”

While it’ll never be labeled as an artistically penned classic, there’s no denying “Jump Around” as one of the biggest songs of 1992. It rose all the way to number-three on the Billboard Hot 100 and finished ’92 third on the year-end Billboard Hot 100.

While “Jump Around” was literally a one-hit wonder for House of Pain, the group enjoyed success individually after the group disbanded in ’96. Frontman Everlast had a huge solo hit with “What It’s Like” two years later while DJ Lethal would go on to join Limp Bizkit.