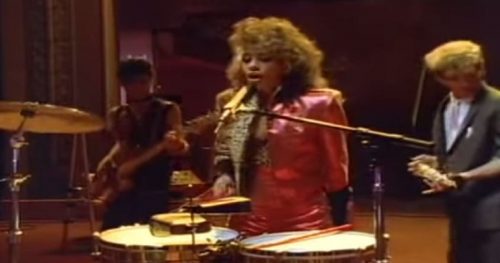 I can’t say Sheila E. is the best drummer that’s ever lived.  That’s preposterous.  However, I dare you to name a percussionist that’s ever done 360 spins regularly while playing without missing a single beat—and looked sexier doing it.

Good luck with that.

Barely teenage Patrick Moran was obsessed with Sheila E. after “The Glamorous Life” hit the radio in 1984. She was both gorgeous and talented as she emerged; seemingly out of nowhere from a cluster of artists Prince was writing music for—a clan that included Appollonia, Vanity 6, Morris Day (The Time) and The Bangles.

The story goes Prince originally wrote “The Glamorous Life” for Appollonia but pulled it and gave it to Shelia E. after Prince lost interest in the former artistically.

It was the right decision.  Several lives performances and the accompanying music video had me liking the song even more.  She was hot, a great performer and this tune appealed to me. I’d like to give you something a little deeper but that’s all I got.

Great Lyrics:  It’s a great battle between materialistic wealth versus something deeper and more meaningful.

She’s got big thoughts, big dreams
And a big brown Mercedes sedan
What I think this girl,
She really wants is to be in love with a man”

Fun Fact:  Genesis had a huge hit in 1986 with “Invisible Touch”— their only number-one hit. Phil Collins wrote the song, which is about a woman who holds a mysterious power over a man.  Collins credits “The Glamorous Life” as an influence when writing the song.