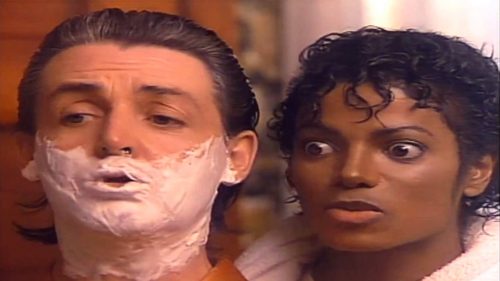 It doesn’t get more powerful musically in the 1980’s and quite possibly any decade before or since than when music royalty Michael Jackson and Paul McCartney collaborated on a song.  If you’re into today’s music, it’s the equivalent of a Bruno Mars/Ed Sheeran duet.

“Say Say Say” was actually the second time the two got together to produce a mega hit, with the first time being “The Girl is Mine” off Jackson’s epic “Thriller” album in 1982.

This song came out at the height of Jackson’s musical dominance, as “Say Say Say” amazingly became the seventh Top 10 single of 1983.  I mean seriously think about that—absolutely incredible.

Despite being a smash hit commercially it drew just mixed reviews critically.  It’s something that always baffled me, as I found “Say Say Say” fun and expertly done in contrasting styles— McCartney as the voice of sanity on the record while Jackson’s lyrics and delivery reeked of desperation.

Songfacts describes “Say Say Say” perfectly: “The song is about a lovelorn guy alternately pleading with a girl and disparaging her for breaking his heart. The bipolar nature of the song lends itself to the duet format, with McCartney’s verses seeming somewhat reasonable (“Don’t play games with my affection…”) while Jackson is the voice of desperation (“Standing here, baptized in all my tears..)”

I never fully understood the video, in which the two are con artists albeit ones who give back to the poor.  Michael unsurprisingly enjoys being playful and dancing while Sir Paul is the ring-leader because why the hell not—he’s a Beatle.

This is a song far too many have neglected if not forgotten about all together over time.

Chart Success:  The biggest smash hit on this countdown thus far, “Say Say Say” rose to number-one on the Billboard Top 100 and remained there for a full six weeks. It finished 1983 on the year-end Billboard Top 100.

Great Lyrics:  I’d be lying if I said the strength of this song wasn’t the vocals of Jackson & McCartney far more than the accompanying lyrics.

“You never ever worry and you never shed a tear
You’re saying that my love ain’t real
Just look at my face, these tears ain’t drying”

Fun Fact: The friendship between the two icons became fractured roughly a year later when Jackson outbid McCartney for the publishing rights on several Beatles songs, which forced McCartney to have to deal with Jackson anytime the songs were used commercially.