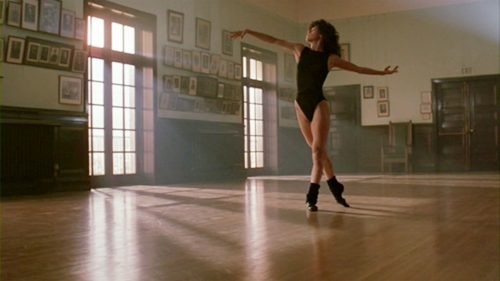 There’s a million things about the 80s that elicit fond memories.  At the forefront is the MTV era, and not just because of videos. Thanks to the music video generation, incorporating present-day popular music into movies became a regular thing.  Among many, two movies in particular stand out to me…flicks I probably enjoyed more for the music than the movie itself— Flashdance and Footloose.

I’m a sentimental dude and precious few things from the 80s speak to me more than Flashdance.  Whether it’s the epic Jennifer Beals oversized sweater/legwarmers combo still worn ad nauseam today at  costume parties or Irene Cara singing the hell out of the title soundtrack , it produces some of my favorite remembrances.

I could’ve been monumentally embarrassed were there hidden cameras installed at our home. I boogied around my house like I was Danny Terrio to this song.  It wasn’t my first brush with being obsessed with an Irene Cara tune either. That distinction belongs to her singing “Fame” in 1980.

As good as Fame was, “Flashdance” was on another level.  Whether you’re singing along, dancing with or sporting the clothes, everything about this tune is chockfull with awesomeness.

Oddly, this wasn’t even my favorite song from the Flashdance soundtrack.  You’ll find that out soon enough.

Fun Fact: This song was co-written by Cara and Keith Forsey with Giorgio Moroder composing the music.  Forsey and Moroder were giants in the 80s movie soundtrack industry.  Moroder wrote two hits for Top Gun (Take My Breath Away & Danger Zone) while Moroder penned hits for Beverly Hills Cop II (Shakedown) and The Breakfast Club (Forget About Me).