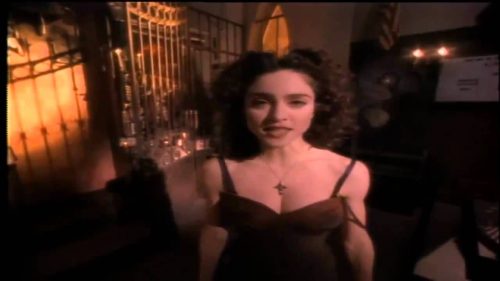 Contrary to popular belief, this isn’t a countdown of my favorite 100 Madonna songs from the 80s, despite her already appearing for a third time over these first 17 selections.

“Papa Don’t Preach” (86) and “Borderline” (88) have made their presence felt on the list, and now “Like A Prayer” comes in a bit higher.  Unlike her first two on the list, this song was released late in the 80s (March of 1989) amid much hype and fanfare.   Research (thank you songfacts.com) reminded me that “Like A Prayer” was a huge deal as a Pepsi commercial before the song was ever released to radio. The two minute commercial features (then) present Madonna sitting on a chair watching an 8-year old version of herself on television, with several clips of her dancing.  A shorter version of the commercial was teased in a spot during the Grammys and eventually premiered during an episode of the Cosby Show on NBC a few weeks later.

In characteristic Madonna fashion, the song’s release came with accompanying video that triggered much controversy.  It depicts Madonna observing the murder of a white girl by a white supremacist group that gets pinned on a black man.  Madonna takes refuge in a church as she finds inspiration to come forward with what she’s seen.  The video also shows her kissing a black man (interracial affection in the 80s was fare more rare than youngsters today can understand) as well as dancing directly in front of burning crosses.

To the disbelief of no one, the video was condemned by the Vatican and Pepsi subsequently stopped airing her commercial, forever.  #SoftAssBitches

I simply don’t care about the theatrics.  MoranAlytics is all about the music, baby— and this was yet another astonishing Madonna vocal performance that felt like a cross between conventional pop rock and Gospel music, both of which I’m fans of

I know that leaving “Like a Prayer” as a juicy mix between pop and gospel has me rather narrow-minded—especially since Madonna’s music around this time (she’d just turned 30) was starting to drift from candy pop and become more intimate and mature.  Regrettably I don’t scribe for Rolling Stone, so I’ll stick to running down my countdown and explaining why I like each song as best I can.

Great Lyrics: While she’s singing about God, it’s quite easy to misinterpret some of her words as something a little—raunchier.   Anyway, this song isn’t about memorable lyrics as it is her impressive delivery.

“When you call my name it’s like a little prayer
I’m down on my knees, I wanna take you there
In the midnight hour I can feel your power
Just like a prayer you know I’ll take you there.”

Fun Fact: Leon Robinson, portraying the black man falsely accused of murder in the video is a very accomplished actor.  Among movies to his credit: Colors, The Five Heartbeats, Cool Runnings, Above The Rim, Waiting To Exhale, The Temptations and Ali.