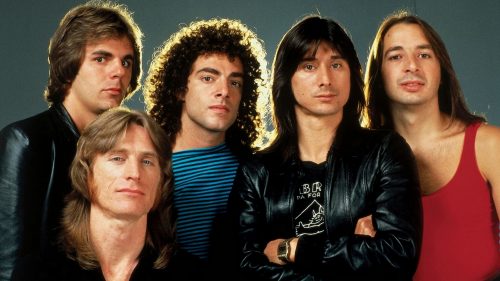 Don’t get me wrong, Journey’s “Don’t Stop Believing” was hardly an underground cult sensation when the band first released off their Escape album in 1981.  The song cracked the Billboard top ten and was popular.

But not that popular.

It was always an anthem of sorts, but compared to an already materializing catalog of Journey successes, “Don’t Stop Believing” almost felt like an antiestablishment anthem.  I vividly remember walking around the west side of Buffalo in the 80s with people blasting “Open Arms”, “Faithfully” and “Who’s Crying Now” among others on their boomboxes—but not this ditty

Of course, that all changed in 2007 when show creator David Chase chose the song to (literally) abruptly end his iconic “The Sopranos” HBO series. From there “Don’t Stop Believing” was resurrected in popularity, and today you can’t go to a Stadium and watch the home team rally without hearing this song explode from the speakers.  Also, good luck not hearing it get butchered at any karaoke show.

I don’t know why that bothers me—it shouldn’t but it does. I was barely 10 years old when this became one of my favorite songs. I guess I feel like people had 26 years to get on board and didn’t until the Sopranos.

Chart Success: “Don’t Stop Believing” peaked at number-nine on the Billboard Top 100 in 1981 and finished the year as the 73rd biggest single.

Great Lyrics:  I’m a city boy, but not raised in South Detroit. Still, I’ve always liked the lyrics to this song.

“Workin’ hard to get my fill
Everybody wants a thrill
Payin’ anythin’ to roll the dice
Just one more time
Some will win, some will lose
Some were born to sing the blues
Oh, the movie never ends
It goes on and on, and on, and on”

Fun Fact: “Don’t Stop Believing” biggest chart success isn’t even from Journey.  The cast of “Glee” performed and recorded this song and it climbed all the way to four on the Billboard Top 100 in 2010.