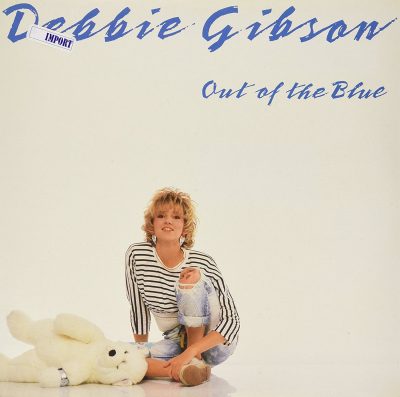 Why I Loved It: Don’t even come at with any bullshit if you’re not a Debbie Gibson fan. If you were around in the 80’s and didn’t have love for Ms. Gibson and this album in particular there’s probably no saving you.  I’m not sure it’s possible to overstate how much I loved Debbie Gibson when I was in high school. I wanted to marry her, or at least have her sing to me. In an era when more girls and all dudes were digging Twisted Sister, Bon Jovi and Pat Benatar I was all about playing Debbie Gibson records and I ain’t sorry about it either, so don’t @ me. Out of the Blue undeniably employs the superficial bubblegum pop production/innocent simplicity of the era but Gibson differed from most 80’s female teen pop vocalists in that her talent as a singer, writer and producer at such a young age was on a level that transcended this genre. Maybe dance/pop music wasn’t taken seriously but Gibson was a seriously talented artist.

Because she was only around 17 when she became famous, many considered Gibson an overnight sensation.  The truth is Gibson spent more than a full year toiling at local malls and anywhere a stage could be found across the country before she achieved mainstream status.

“Foolish Beat” is my favorite—an amazing ballad/sad song accompanied by an even sadder video where Gibson’s filled with remorse over dumping a guy she wants back. Man, I wished I was that freegin’ dude back then. “Only in My Dreams” is so memorable that for me it’s one of the biggest posters for cheesy 80’s pop music.  In conclusion, you can’t have a serious 80s countdown without including Debbie Gibson, who by the way is still insanely beautiful at 47-years young.  LOVED this album!

Fun Facts: In People Magazine Gibson shared 30 fun facts about herself in honor of the 30th anniversary of this album this past August.  Here’s a few of them:

“The photographer for the album cover thought my knee was pulling focus in the photo, so the makeup artist drew that face on my knee! Little girls everywhere came to my concerts with faces painted on their knees!”

“We shot the “Foolish Beat” video at South Street Seaport on St. Patrick’s Day. There were drunken New Yorkers shouting at me and having a blast celebrating while I was doing my “walk and cry” scene.”

“I remember where I was when I heard the remix of  “Only in My Dreams” on the radio for the first time. I was heading back from a voice lesson when I heard it on Hot 103.5 in New York City. My dad almost drove off the road because he was so excited!”