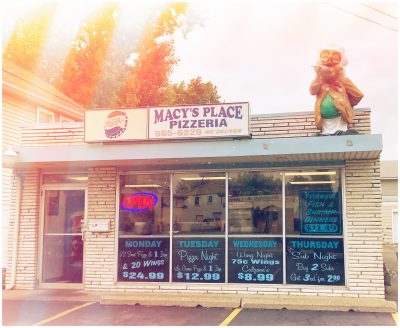 I don’t have much, if any expectations when it comes to chicken wings from pizzerias. They typically range from decent to tolerable or worst. Sorry, I’m just being honest here. A longtime good friend loves the wings at Macy’s Place Pizzeria and recommended I try them, which considering my history with pizzeria wings had me lukewarm at best.  I mean, they literally have the name pizzeria in their name.

That being said, when a cousin also suggested we got together to give his place a shot, I decided to bite.  Actually, two cousins came to Cheektowaga to join and we ordered half medium/half cajun hot. I sat there prepared for underwhelming results and ready to bitch out my friend for originally over-hyping the spot. Let’s find out if she was right.

PROS: She was right. Look, I’m going to get right to the point—these wings were ridiculously good.  They were cooked perfectly, adequately sized with very (very) tasty sauce on both the traditional medium and especially Cajun Hot flavors. I can’t emphasize enough how straight up good both were.  For sauce lovers who don’t like wings insanely crispy (such as myself) the portion of sauce/crisp was perfect.  As a bonus we went on a Wednesday and unbeknownst to me it was wing night. As a result I only paid like nine bucks for a single order of wings and a can of soda.

CONS: My only wing critique would be the hot cajun was too saucy for those who don’t want their wings drowning in it. The ratio on the medium was perfect but definitely too much (for most) on the Hot Cajun.  Also, this is not a place designed to sit down and enjoy your food—there’s only one table and two stools for a breakfast bar setting against the glass.  Factor that in with no public bathroom and they’re begging you to take your food in a styrofoam and be on your way. 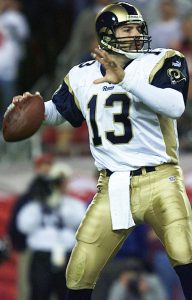 QB COMPARISON: Kurt Warner. The dude was a grocery store clerk who also toiled in the Arena League for three seasons before joining the Rams. After sitting the bench for a year, an injury to Trent Green happened and 18 years later Warner landed in the Hall of Fame.  I’d be willing to bet merely a tiny fraction of Western New York wing goers have heard of this place (Warner circa 1999).  Give Macy’s Place Pizzeria a crack and these may turn into Hall of Fame caliber wings for you.

RECORD IF MACY’S PLACE PIZZERIA PLAYED A FULL NFL SEASON: 14.2.  They’ll drop a game because of sloppiness after being overrun with orders and maybe a late season meaningless finale, but this is a team that could and should take the field every Sunday fully expecting to win.

OUTLOOK: Here’s a wing take— these may literally be the best pizzeria chicken wings I’ve had to date.  Their medium blow away La Nova’s and the cajun hot at least rival La Nova’s Hot BBQ in terms of flavor as far as I’m concerned.  La Nova is the pizza joint wings measuring stick for me and these are not just comparable but right there with them.  In a region overstocked with trendy places and big reputations this spot is a quiet assassin in the industry. The wings at Macy’s are at least on par with several of the best known bar/restaurant wings in Western New York.

I can’t recommend trying these enough and by the way, as of this posting they’re above any wings I’ve tried other than Nine-Eleven Tavern.  Yes, that includes stalwarts like Elmo’s and Bar Bill.

I’ve only been willing to die on the hill when raining high praise on the most under-the-radar top spots a handful of times: The Audubon North, Dalmatia Hotel and O’Neill’s have been my personal selections under the category. Macy’s Place Pizzeria now officially joins them. This place will become monster-sized huge as more people try em, trust me.