After five long years I’m back in my hometown of Buffalo, only this time not a visitor but back for good.  That means a great deal to me in many ways, and one of course is more access to wing spots than ever before.

My first wing trip back me to Bada Bing on Chippewa street down and holy shit, people—I’ve waited a long time to be able to have a new review! Here’s to the next 70 reviews coming much quicker!

One thing of note, I need to preface this by saying a trusted wing source buddy of mine (AKA Marcel Louis-Jacques) told me the Italian wings were some of the best he’s had but I didn’t see his tweet until after the fact.  So rather than get my normal traditional (hot or medium) wing along WITH a signature flavor to evaluate and tier, I only got hot wings this time around. Anyway, onward we go. 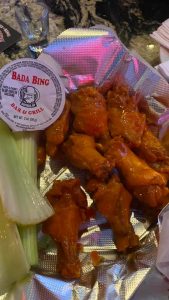 PROS: I asked for the wings hot and trust me, they were hot. Maybe it’s because I haven’t had a good hot wing in multiple months but these pushed my tolerance. I tend to get sweaty when eating hot wings that are actually hot and I was in the bathroom basically toweling off my forehead and thinning hair after four wings. There’s a lot of places where hot is essentially medium. This ain’t one of em.  They were on the saucy side, which I enjoy and were cooked plenty fine. I never specifically ask for crispy or extra crispy—I let the cards fall where they may.  These weren’t overly crisp but were far from soggy.  Considering the wing shortage going on they were reasonably priced at just under $15 for a single.

CONS: There’s nothing terrible that stands out as a con, so “nitpicking” may be a better term. The wings weren’t tiny but I’ve had much bigger. Also, and again a nitpick more than a con is the traditional hot sauce doesn’t stand out—it’s literally just Frank’s with maybe a little added pepper for kick or something. I don’t do Blue Cheese (I know, blasphemy) but most do and I can tell the Bada Bing pre-packaged blue cheese wasn’t visually appealing to most on Twitter.

I actually do have one con/bitch that’s completely unrelated to wings but I’m unloading it anyway.  I was with a buddy and got a single (one ounce) shot of Jameson.  $6.25!  To quote Chris Rock from SNL, “Good Lord that’s a lot of money!”  What the hell man, I’m in Buffalo not Vegas—that’s pricy for a single shot when there’s no live entertainment or anything going on.

RECORD IF BADA BING PLAYED A FULL NFL SEASON: 9-8 and in fairness they played the season without one of their best players as again, I heard the Italian wings are the best in their arsenal and I failed to try em out.

OUTLOOK: For the purpose of this review, I can only rank their traditional wings against TRADITIONAL wings of other places simply because I didn’t try their signature Italian flavor.  Also, let’s skip the drama on if they’re ranked among the very best in Western New York because that’s not happening—- the Nine Eleven Tavern, Elmo’s and Bar Bill’s of the region are safe.  That said and this is extremely important, I consider Bada Bing’s competition your everyday bar and wings joint and on that level, I think they fare well, maybe even very well. Non-fancy seasoning or not, these were good hot wings.  If you’re at the bar by yourself, on a date or with a buddy with the pints flowing and you find yourself hungry, these are solid.  You ain’t gonna be complaining about them. They’re good.

I regret not having the Italian wings to compliment them but I’ll say this in fairness to Bada Bing, I don’t think they try fancying themselves as Buffalo’s best chicken wing.  If they did I’d probably be more negative.  The traditional wing I’m reviewing/comparing is solid but merely a complimentary piece to what they offer. I’ve had their pizza previously, more specifically the steak and cheese pizza and it’s amazing. I’ve also heard incredible things about the Antonio in the Grass sandwich and other food items. There was also a dude next to me who got a veggie burger and the thing (along with fries) was huge.  The vibe is really cool and feels trendy.  As a bonus, maybe I got lucky but was down here on a Thursday around 9pm and it wasn’t all young 20 somethings like I feared it would be.

I’ll conclude by saying I wouldn’t recommend someone goes out of their way to go to Bada Bing specifically for traditional wings when they have so many more appealing food options, but I’m very keen on this place’s food menu and vibe as a whole and it’s absolutely worth a trip to Chippewa Street if you haven’t been there already—minus the $6.25 Jameson.