Breaking news: Mulberry Italian Ristorante has chicken wings.  OK, that’s not really breaking news but I’d bet a vast majority out there didn’t know they served wings. I certainly didn’t and for good reason—Mulberry’s known as one of if not the premier Italian restaurants in all of Western New York, not typically the type of places that offers wings on the menu. It wasn’t until I contacted one of the owners of Sonny Red’s in Lackawanna about taping a podcast did I discover Mulberry.  Turns out Sonny’s was closed on the day I wanted to tape the show, so the owner made a few calls and next thing you know Nate Geary, Matt Parrino and myself were at Mulberry Italian Ristorante trying wings and taping an episode of the “Finer Wings Club”. Now, I knew I’d be blown away by the vibe because again, it’s one of the most liked and respected restaurants in the region.  But the chicken wings?!?  Let’s find out. 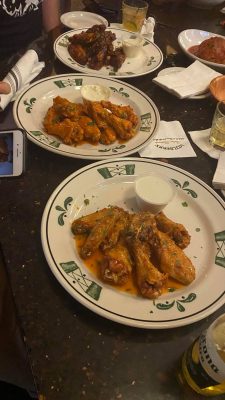 PROS: Yeah, so I came here predominantly for the advertised “Tre White Spicy BBQ” wings but honestly,  “Joe’s Medium” stole the show.  So we’re clear, Joe’s an owner there and has something to do with the creation of the wing sauce recipe (not sure to what extent).  Anyway, this medium wing was flat-out exceptional and if I said it once I’ve said it a million times, traditional medium/hot wings will always carry more weight than gimmicky flavors when it comes to my personal wing appraisals.  By the way, these were nearly identical as Sonny Red’s medium wing, advertised as “made famous by Eric Wood”.  The wings were copiously sized, cooked perfect and the sauce was very much NOT the traditional Franks plus butter combo you get at most places. I LOVED these wings.

For the record, the Tre White Spicy wings were pretty damn good too—kind of a sweet brown sugary taste to em.  I wouldn’t necessarily call them elite but they did the trick just fine.  We also tried some Honey BBQ wings too and they were pretty good, although honestly Nate and especially Matt both liked them more than I did.

CONS: I say this half-jokingly, but the only real con is figuring out how you go to such a renowned Italian place like Mulberry and end up getting—-chicken wings? Also, not a huge deal especially since we’re talking about a place an elite restaurant not to mention the rising cost of wings due to a shortage—but $16 for a single and $28 for a double is pretty expensive.

RECORD IF MULBERRY ITALIAN RISTORANTE PLAYED A FULL NFL SEASON: 12-5 with a meaningless Week 17 loss.  So we’re clear here –we’re only talking about wings.  This may be the best overall restaurant in Western New York, period, so if everything on the menu was fair game we’d be talking a potential 1972 Miami Dolphins season here.

OUTLOOK: I take a lot of pride, perhaps to a fault with my wing ventures and how often people come to me with suggestions of places I try.  I can sincerely tell you that not a single person ever told me about Mulberry wings, not one.  I don’t think most people even know they have them.  Why would they? This place is about Lasagna, gourmet meatballs and innumerable Italian dishes.

But I’ll tell you what—these are some incredibly good wings.  Tre White’s BBQ wings were good but don’t really stand out in a sea of other wing spots that offer varieties of BBQ wings.  However, the Joe’s Medium wings absolutely do.  There’s literally dozens of unbelievably good wing houses in Western New York but only a small handful, in my opinion where you can get a traditional medium/hot wing that doesn’t taste like most the competition.   Nine Eleven Tavern, Bar Bill and Sonny Red’s immediately come to mind.  You can now add Mulberry Italian Ristorante to that list as well. “Joe’s Medium” is elite.

Mulberry will be ranked very high when my next Wing Rankings/Tiers come out.