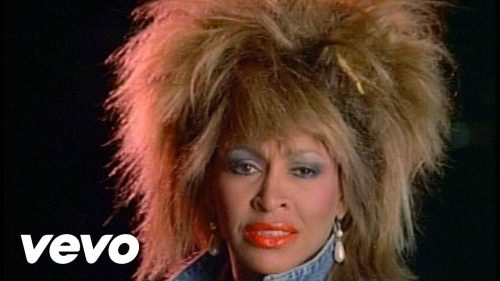 Tina Turner’s “What’s Love Got To Do With It” is perhaps the most played song on the radio I can remember. I swear, in 1984-85 I’m not sure I ever heard 45 minutes of radio without this coming on.

That’s not a complaint.

It was popular—as in Tina Turner is dominating the Grammy’s popular.  This song won three Grammys in 1985: Record of the Year, Song of the Year and Best Female Pop Vocal Performance.  Turner also won the MTV award for Best Female Video.

Anyway, even without knowing Turner’s story on her abusive past, I was all kinds of into this song as a 13-year old.  Turner had a sassiness to her voice I liked hearing, and being extremely hot middle-aged woman when this came out didn’t hurt either.

As I got older and learned about Turner I came to appreciate her even more.  A star in the 1960s with her husband Ike, Tina had sort of faded into obscurity since her big “Proud Mary” (cover song) hit in 1971.  She endured years of beatings by Ike before finally getting divorced in the mid 70s and stayed out of the spotlight until this song became her comeback hit.

I suppose if you’re the hopeless romantic type the lyrics won’t suit you so well, as the song is about her being intimate but having zero emotional connection with her suitor.  To that I say, whatever—there’s worse things in life.

Great Lyrics: Tina was out there looking for a booty call.

Fun Fact: According to Songfacts.com, Turner wasn’t a fan of recording this song. The page says “It’s really an anti-love song, and Turner hated it. She balked at recording it, but had the good sense to defer to her manager, Roger Davies, who was engineering her comeback and was sure the song would be a hit. Davis got the song from his friends, the songwriters Terry Britten and Graham Lyle (who was in the duo Gallagher and Lyle), and it was Britten who produced the track.”