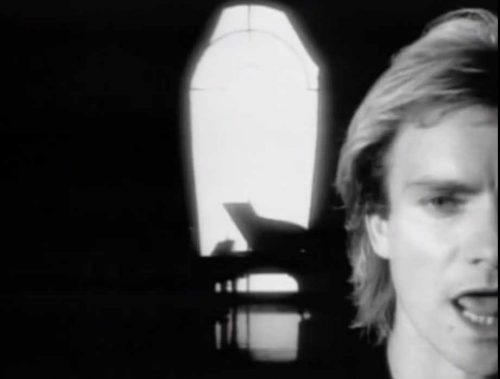 In the interest of full disclosure I wasn’t crazy about this song when it first came out in 1983.  I was merely 12  sans a firm grasp of what the song was about, and certainly didn’t know it’d go on to become the 80s stalker anthem.. I suppose that’s partially due to a lack of a female in my life to like enough to essentially creep on.

The other reason I wasn’t a huge fan was being simply sick of hearing it.  It was on the radio or MTV all day, every day.

I love the Police. They’re easily one of my favorite rock bands of the 80s, if not all-time.  Today many love 80s music regardless of what style it was, but back in the day, at least from my recollection is rockers landed on one side of the fence.  You were either on the side of commercial rock (Police, Styx, REO, Journey, etc) or hard rock/hair rock/cock rock (whatever you wanna call it) groups like Motley Crue, Poison and Whitesnake.  I was the former.  The Police just pounded out tracks I loved listening to.

Ironically I kind of hate Sting as a solo artist, but whatever.

This song progressively grew on me as I got older. Some, at least those who don’t digest lyrics well actually consider this a love song. It isn’t—not by a longshot.   Sting wrote the lyrics and said in an interview “it’s about jealousy, and surveillance and ownership.”

A few years after its release and long after most fans moved on I started to love this song. Fortunately, I don’t recall being scorned by a girl as the motivation either.

This tune has had incredible staying power. It’s appeared on seven movie soundtracks including one of my favorites; 50 First Dates.

Today it’s firmly entrenched in regular rotation on my playlist.

Chart Success:  Well, let’s see.  It reached the very top of the Billboard Top 100 on July 9th, 1983 and remained number-one for eight weeks (“Sweet Dreams” by the Eurythmics finally knocked from the top spot).  It spent 22 weeks on the charts. It was the number-one song of 1983 on the year-end Billboard charts.  Oh yeah, it also finished number-five on the Billboard Top 100 for the entire decade of the 1980s.  Yeah, this was a big hit.

Since you’ve gone I been lost without a trace
I dream at night I can only see your face
I look around but it’s you I can’t replace
I feel so cold and I long for your embrace
I keep crying baby, baby, please”

Fun Fact: This was more than just a commercial smash.  “Every Breath You Take” won the 1984 Grammy for Song of the Year and Best Pop Performance By Duo or Group with Vocal.   Of course, rap fans remember Diddy sampling this song on his “I’ll be missing you” tribute to Notorious B.I.G. in 1997.