This is the third straight year I’ve put out my personal ranking/tiers of wing spots for Western New York, so I guess this is now officially an annual thing.

The first I simply ranked them in numerical order from first to worst. Last year I switched things up and moved from strictly numerical order and tiered the spots, seven of them. I’m doing that again, so with the exception of the top four (my Mt. Rushmore) there’s no numerical ranking instead are exclusively in tiers. My big reason for the switch is thinking there’s not automatically a significant difference in quality if one spot is ranked a dozen ahead of another. Instead I broke then down into seven tiers, meaning far as I’m concerned all wings in that tie are essentially equally good (or bad).

You may notice wing spots for each tier aren’t alphabetized so if you really want to know where I have them numerically I guess you can figure it out, but again I think each within the specific tiers are more/less equal.

Here’s my seven tiers with a brief explanation of each.

Mt. Rushmore: The four undisputed championship wing spots of Western New York.
The Elite: The next best thing—right on the brink of being immortalized.
All-Pro: Perhaps not MVP material but categorically deserving of being discussed among the best.
Solid Starter: You certainly won’t be complaining. Exactly what the description reads—solid.
Depth Chart: You can do far worse but at this point — significantly better as well.
Roster Bubble: If left with few other options these places may suffice, but I can’t recommend them.
Waiver Wire: I’d rather eat pizza or something else. 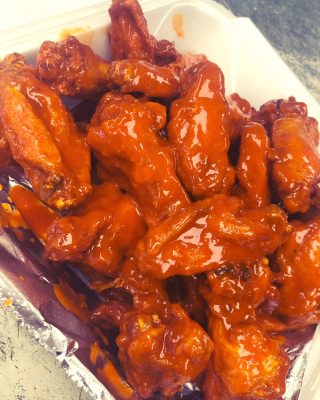 Since last year’s chart I’ve tried/added 16 new places while a few previously ranked places have went out of business, I’ve had wings at several repeat places as well, some multiple times so yeah, I still like wings as now as much as ever despite the ridiculously rising prices. I’m once again living in Buffalo I’m regularly out on the wing trail as opposed to just occasional trips back when living in Florida. Consequently, some places that impressed more than the first time I had them rose while others dropped.

Two things worth noting. Evaluating chicken wings is tough, especially when the playing field isn’t always level. I always have medium/hot wings at each spot (that’s rule No. 1) but almost always try some sort of specialty flavor as well. Traditionalist wing lovers have a valid argument that only medium/hot wings should matter, but I factor in several things including a signature flavor when viable, price, service and overall vibe of a place. It’s my game so I get to make the rules.

Which leads to my second point—these rankings and tiers are nothing more than personal opinion. I’ve never fancied myself a wing connoisseur. I don’t take myself too seriously with this exercise and nor should you, seriously. I constantly enjoy wing spots I see others hating on and vice-versa, like all the time. Food’s every bit as subjective as music, movie or television show preferences.

One last thing— as everyone from Buffalo who’s had wings elsewhere knows, a place tiered lower in Buffalo would probably be elite in most other cities. Being “depth chart wings” here doesn’t mean I think the place sucks, it just means there’s no less than a few dozen fantastic places here in Western New York that are at least a little better.

On that note, here’s my 2022 Summer/Fall Chicken Wing Tiers. None of these are linked but if you go on the website and click the “WING” link, you’ll find full reviews for many of these choices.

MT. RUSHMORE WINGS
(These are the Jim Kelly, Bruce Smith, Thurman Thomas and Andre Reed of chicken wings in WNY and belong in a tier all to themselves)

(Notes: only the Mt. Rushmore Wings are actually numerically ranked (1-4) and Elmo’s has taken over the top spot. I’ve been too all four spots several times and Elmo’s not only has the best Cajun double dipped wings on earth (not to mention Hot Cajun Dipped) but their traditional medium/hot wing is also very good and Elmo’s is absolutely consistent every time. Nine-Eleven Tavern is still INCREDIBLE but the two times I’ve been there since the owner passed I’ve noticed the wings may have fallen off just a smidgen, allowing Elmo’s that crease to slide into my top spot. I still absolutely love Bar Bill, who’s become the most popular place in WNY (and for great reason) but I did see a discernible difference personally in quality between the original East Aurora location and the new’ish Clarence Bar Bill North. Macy’s Place Pizzeria is still amazing and good enough to be on the Mt. Rushmore, but sometimes their small place gets a little overrun with business and it’s hard for them to keep up with the 100% consistency rate on their wings.)

(NOTES: Mulberry and Imperial are both new to this list and in a big way. Mulberry’s traditional 716 wing is incredible (cut from the same cloth as Sonny Red’s) and their Tre White BBQ wings have a nice southern kick to em. I did a show with Matt Parrino and Nate Geary there and they were both blown away as well. Imperial has really solid medium/hot wings and come at you in waves with specialty flavors, especially their sully style sauce if you can stand the heat—I can’t, and their hot honey mustard BBQ wings, which are literally elite. Nate and Marcel Louis-Jacques will both attest to that as well after doing a show there with me. Lastly, Wingnutz was a huge riser from last year after having them again and being blown away even more than the first time)

(NOTES: New to this list is Belt Line Brewery, which had shockingly good 716 wings that tasted almost like a clone of Bar Bill, and their signature “All Dressed” which immediately became one of my favorite signature wings in all of Western New York. Judy’s Lounge Bar & Grill in Niagara Falls is also new, not spectacular but so, so good—easily one of the best traditional wings in the area. O’Neill’s is a spot worthy of being elite, I just wish they were a touch more consistent)

(NOTES: I think Tier 3 is the level where anywhere else but WNY you’d be talking total elite status. There’s a few widely known wing spots on here some may be surprised to see this low, Doc Sullivan’s, Gene McCarthy’s and The Big Tree. Again, very good spots I enjoy I just think there’s a few dozen that are a little better. Prohibition is a spot I may’ve slightly underrated that has potential to move up next time around.

(NOTES: Many will think Forty Thieves and Swannie House are too low. Obviously I disagree. Also, many think Anchor Bar completely sucks and again, I disagree. They’re overrated and overhyped, obviously but their wings aer still decent. Strikers may be the only bowling alley even worthy of having a wing ranking. Lastly, if you’re in the vast minority that actually prefer breaded wings there’s a pair here for you in Sal’s Lounge and Vinny’s)

(NOTES: Goodbar is a very popular place for wings among other things but I base these on my own experience, not anyone else’s. Truth is I’ve had the wings twice and both times everything about it felt mailed in. Dwyer’s Irish Pub is another popular place but I think they’re severely overrated, at least for wings. The place itself is a great time just like Goodbar but again, I wasn’t impressed with either spot’s wings.)
♦♦♦♦♦

(Notes: There’s nothing I enjoy less than cutting a business down for something. Most these places are simply great for other things ,such as Wiechec’s being elite for fish fries and beef on weck, or Mooney’s for Mac & Cheese or Pasquale’s with Italian food. SC Lounge and Kettles are -great spots to drink and enjoy your friends while Guzzo’s and Lovejoy have pretty damn good pizza. Unfortunately if you’re in this tier that means I think your wings basically suck, none so more than Glen Park Tavern, which is unfortunate because everything else about this place and their menu is good. It blows my mind this place somehow got on the official “wing trail” of stops for the aspiring wing-goer.)