I get tons of suggestions on my Twitter or Facebook on spots to hit, too many of course to ever realistically visit every place mentioned.  Ironically, not a single person mentioned Connor’s in West Seneca, other than my buddy who lives in the area and wanted to get together for a lunch literally in my final hour in Buffalo before headed back to the airport.

Always hoping to unearth a hidden gem for wings, I gladly agreed despite zero Connor’s wing buzz from fans. So, is Connor’s some secret great place for wings the public doesn’t know about?

CONS: There’s positively zero wow factor when it comes to wings at Connor’s.  While there’s nothing that makes hate or even dislike them, everything about them look and tatse, again at best “pretty decent”.  Admittedly that’s not necessarily a con but odds are you’ve had wings at other places you like far more, so why spend your dollars on these? 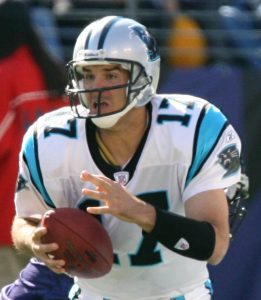 QB COMPARISON: Jake Delhomme.  Nothing sexy about dude’s game but was smart enough to check down to Steve Smith regularly and hope Smith would do the rest.  In other words, a “pretty decent” quarterback but I wouldn’t exactly call him a risk taker.

RECORD IF CONNORS PLAYED A FULL NFL SEASON: 8-8 from now to eternity.

OUTLOOK: You’re taking zero chances having these wings and whether that’s good or bad depends on your perspective.  With literally dozens of other quality choices around Western New York I highly doubt you’ll consider Connor’s wings memorable.  Conversely you’re equally unlikely to leave thinking they sucked.  You’ll get a “pretty decent” workmanlike wing at Connor’s and that’s generally fine. There’s several places I’ve walked in at thinking the wings would blow me away and left disappointed. There’s a case to be made that a safe wing is always satisfying.

One last thing worth pointing out—by no means does Connor’s tout their chicken wings as one of the best in the business.  I can testify that Connor’s has a pretty bomb roast beef sandwich and while I haven’t experienced it personally, they have a rep for good fish fries. I went here to add a new spot to my list and meet up with a buddy who lived close by.

It’s a friendly place with friendly (mostly elder) faces and good food generally—just not worth seeking out specifically for wings.