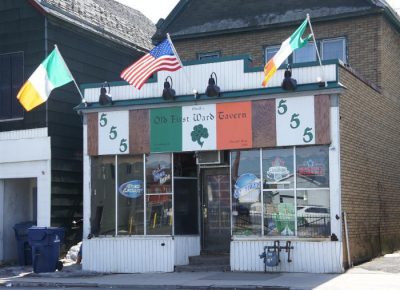 Adolf’s on South Park Avenue in the heart of the Old First Ward isn’t designed for outsiders.  Don’t get me wrong, that’s not to say people from neighborhoods other than the Ward aren’t welcome, but it’s blatantly obvious the locals are the one buttering the bread here.  It’s old and run down, just like we love our watering holes in Buffalo but also surprisingly bigger than it appears from the outside, including a sizeable dining area just a few stairs up.  That’s where I met up with Brandon and Marty from the On!Core Podcast to appear as a guest on their show.  We ate wings, hit the record button and were off and running.  So, about those wings….

PROS: The medium sauce has a nice taste to it with a hint of heat.  If you like crispy wings you’re in luck as these are some of the crispiest wings I’ve had anywhere. Trust me you don’t have to for “extra crispy” here when ordering, in fact you don’t really have a choice—the owner made it crystal clear there’s only one way these bad boys are getting made there.  The wait was what it should be when ordering, the pricing is fair and the bartender was extremely friendly.

CONS: I’m not an extra crispy loving dude and these verged on too crispy for me personally. Also, while the sauce was good I could’ve used more on the plate. 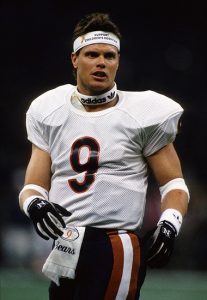 QB COMPARISON: Jim McMahon.  Love him or hate him the dude was unwavering. If you hit up Adolf’s you’re getting extremely crispy wings with light sauce and if that doesn’t float your boat you take your ass somewhere else. You can feel the gritty attitude with the bar, the neighborhood and even the wings.

OUTLOOK: If you come to Adolfs expecting decent wings that’ll hit the spot and leave you satisfied you’re in luck. If you come expecting wings in the upper echelon among Western New York you’ll be disappointed. These are solid workmanlike wings, not much else nor do I think they try to be.  Wings aside, Adolf’s is one of those true character drinking spots—you know you’re in the Old First Ward when there. Shout-out to the men’s bathroom, which on the exterior looks like a phone booth and is about as big on the inside.

I feel good enough about Adolf’s to give it a recommendation especially if preferring your wings nice and crisp. Just don’t have unrealistic expectations. I don’t think Adolf’s ranks particularly high on the list of Best Buffalo wing spots, but like I told Brandon and Marty on their podcast—that doesn’t mean they aren’t good.