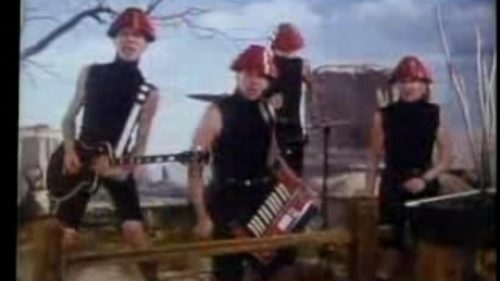 There’s a plethora of worthy candidates, but Devo belongs on any marketing poster for  biggest one-hit wonders in the 1980s.  With all due respect to the band and I’m not exaggerating here, I never heard a Devo song before “Whip It” nor did I afterwards.

Don’t let that take away from my admiration of this classic 80s jam.  Loved everything about it, particularly the unfussiness of the lyrics and vocal delivery.  That was important considering I was but nine years old when “Whip It” was released. I wasn’t ready to dive into the biosphere dissecting strongminded song lyrics in 1980. Hell, I’m rarely able to do that now.

This Devo track was one of, if not the first taste of new wave music I remember. It’s a pioneer in employing a synthesizer as its main source of sound.

Anyway, this isn’t about a Devo education. “Whip It” is on my list because the song was different and fresh to me as young kid and the video was even better. Who doesn’t love four nerdy looking dudes dressed in the same black clothes with matching plant pots on their heads star in a video about a dude bullwhipping a woman’s clothes off and a cross-eyed chick shooting a drunk guy’s beer can from his hand, which leads to him barging into her unsecured house and them having sex or something?

Loved it. To me anyway this is one of the most identifiable songs of the decade.

Fun Fact: As often seems to be the case with 80s songs, “Whip it” didn’t come without controversy. In a 2014 Youtube interview, band member Gerry Casale discusses the band being booted from “The Midnight Special” hosted by Lily Tomlin because she considered Devo’s video offensive to women.