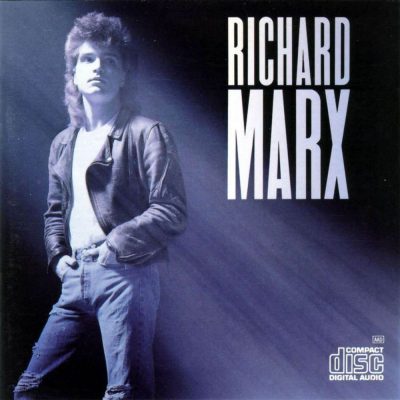 Album MVP: “Hold On To The Nights”

Why I Loved It:  Few artists of the era were better at selecting perfectly assembled mainstream pop radio tracks than Marx. Haters have and always will refer to Marx music as corny cheeseball music and you wouldn’t necessarily be wrong but for me, it’s a major part of the appeal. For starters, stop being such a tough guy and enjoy all types of music, will ya.

I liked this album as a teenager (hate away, haters) and to a certain extent, hearing it today still brings me back to my youth, when more than I ever I enjoyed  listening to top 40 adult contemporary radio at home and in the car.

“Hold On To The Nights” is one of the decade’s better slow jams. “Don’t Mean Nothing” was another great track and earned Marx a Grammy Nomination in 1988. This albumwas soft but whatever – I loved it.  Plus, tell me his album cover isn’t the most 80’s shit ever.

Commercial Success: How does this strike you for commercial success — With Marx’s debut self-titled album he became the first male solo artist in the history of music charts to have four top-three singles from a debut album.  He was only the second artist of either gender to accomplish the feat, with Whitney Houston being the first.  The album would peak as high as eight on the Billboard Top 200 and produced his first Billboard Hot 100 single, “Hold On To The Nights.”  “Endless Summer Nights” narrowly missed landing on top of the Billboard Hot 100 as well, setting for number two while both “Don’t Mean Nothing” and “Should’ve Known Better” rose as high as three.  “Have Mercy” made it to No. 17 on the U.S. Main Rock chart. In total this album spent 86 weeks on the Billboard charts!

Fun Facts:  From Songfacts.com: “Marx won his first Grammy Award in 2004 for a song he wrote with the R&B star Luther Vandross. The song “Dance With My Father,” which was written in remembrance of Vandross’ father, was one of the last Luther recorded. Marx and Celine Dion performed it at the Grammy Awards ceremony because Vandross was in recovery after suffering from a stroke. The song earned Marx a Grammy for Song of the Year. Vandross ultimately lost his life a year later in 2005.

Marx considers his parents his biggest musical influences, as well as recording legends Elvis Presley and Sam Cooke. His favorite singers and songwriters include Elton John, Steven Tyler of Aerosmith, U2, Rod Stewart, the Eagles, Gladys Knight, Annie Lennox, and Earth, Wind & Fire. To Marx, making music is a very important aspect of his life. He has said that, “For me, being a musician is not about an image or controversy or what looks cool. It’s about the music. It comes down to having the privilege of expressing yourself.”

Marx married Cynthia Rhodes in 1989. Rhodes is most famous for her role as Penny Johnson in the classic ’80s film Dirty Dancing. She was also a singer/actress in Flashdance and Staying Alive. The couple have three sons: Brandon, Lucas, and Jesse. The Marx’s reside in Lake Bluff, Illinois.”