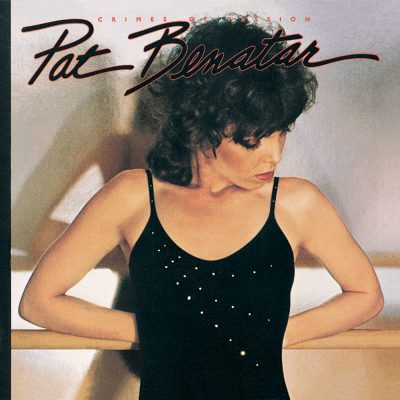 NOTABLE TRACKS: “You Better Run”, “Hit Me With Your Best Shot”, “Treat Me Right”, “Hell is for Children”.

ALBUM MVP: “Hit Me With Your Best Shot”

WHY I LOVED IT:  Is this one of the greatest albums in the history of rock and roll music? No, but it’s one of the biggest and best of the decade and needs to be included in any ultimate 80’s collection. “Hit Me With Your Best Shot” in historic in that it unofficially launched Benatar’s long and incredible run as a mainstream female rock star. It remains one of the signature rock anthems of the era. “Hell Is For Children” was so good that despite never released as a single it’s one of Benatar’s more memorable rock hits.

There’s many things I love about “Crimes of Passion” as a whole but what I love most is it still feels as forceful today as it did 37 years ago.  As far as I’m concerned Pat Benatar’s music has aged incredibly well.

COMMERCIAL SUCCESS:  This was Benatar’s second studio album and one of her most successful. The album would rise to number-two on the Billboard Top 200, with only John Lennon & Yoko Ono’s “Double Fantasy” standing in its way of reaching the top.  “Crimes of Passion” stayed at two for five consecutive weeks and produced three charting singles. The biggest was “Hit Me With Your Best Shot”, which peaked at nine on the Billboard Hot 100.  “Treat Me Right” made it to 18 on the Billboard Hot 100 while “You Better Run” stopped climbing when it got to No. 42.  In total the album would go on to sell more than five million copies.

FUN FACTS:  From Star 102 Cleveland, here’s three things about Benatar you may not have known:

Before Pat got famous, she was living in Virgina working as a bankteller.  At that time she was married to Dennis Benatar. After they divorced she kept the name.

Benatar was discovered at a club called Catch A Rising Star. It also happens to be the place where some great comics like Robin Williams and Richard Belzer got their start.

Pat fought constantly with her record company over her image.  One argument ended when Pat slapped the executive over the album cover of Get Nervous.  The Chrysalis Executive reportedly told Pat “You don’t think people actually come to listen to you sing?”  Also an ad the record company used promoting Crimes Of Passion released without her knowledge used the album cover as a backdrop.  Her tank top was airbrushed to make her look like she was topless underneath. She and Neil Giraldo took more control of her career and image from that point on.