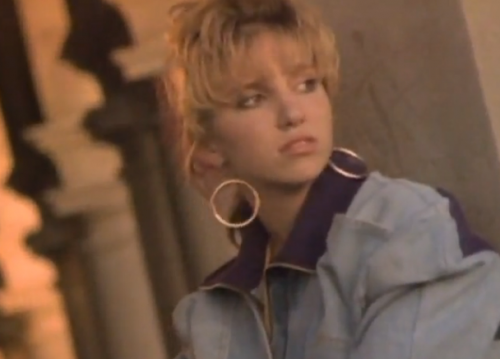 I must make a confession. When doing research and brainstorming before completing my first draft of this countdown, I omitted Debbie Gibson’s “Only In My Dreams” from it.  It’s not that I wasn’t a fan, I was—I simply felt there were 100 songs from the 80s I enjoyed more.

There’s a handful of songs I originally overlooked that needed re-examining, and none more than my favorite teenage blonde from the late 80s.  After spending more time contemplating than anyone with a decent life should, I concluded this song deserved inclusion and righted a wrong.

I compared it to other songs near the bottom of the list sliding it up past ones I had previously ahead of it, including one of her own, “Foolish Beat’ until setting in here.

Gibson was at the forefront of the 80s bubblegum pop era. However, it’s a huge misconception that Gibson was merely a young blonde handled a microphone and told to look and sing pretty. Truth be told she was a solid singer/songwriter well beyond her years.

Gibson penned “Only in my Dreams” when she was just 13 years old, even though it wasn’t released as a single until more than three years later.

It was one of the biggest hits in the summer of 1987 and rightfully so. I implore you to not hear this song and instantly start singing alone.  I promise—you know all the lyrics even if you don’t think you do.

Great Lyrics:  Gibson has long-admitted that when writing this song as a 13-year old she was thinking of a song that would play well on the radio.

Fun Fact: Gibson first began taking piano lessons at the age of five and her first teacher was Morton Estrin—who is credited for teaching Billy Joel.  By the time Gibson was in high school she was signed by Atlantic Records.