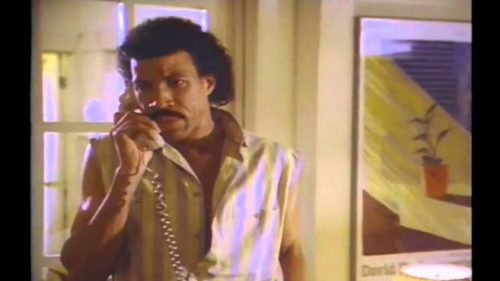 As a youth Lionel Richie was tremendously timid. A blurb from Songfacts.com explains a young Richie.  “When he was young, Richie watched beautiful women walk past but was too shy to talk to them. He thought to himself, “Hello, is it me you’re looking for.”

Man, I don’t know about all that. Richie may have been “too shy” to holler at girls as a youngster but based on his song Hello or at least the accompanying video, his demeanor morphed into full-on stalker mode as an adult.

Unless residing from another planet you’ve surely seen Lionel Richie’s Hello music video. The video, complete with an extended dialogue intro depicts Richie (AKA Mr. Reynolds) as a teacher who falls head over heels for one of his students (Laura).  While others deem Mr. Reynolds’ actions innocuous, the eyes of many including this author considered this dude a stalker.  At a bare minimum, calling your student while she’s home in bed to serenade her on the phone is a tad eerie.

From the opening to Laura’s climatic hideous sculpture of Mr. Reynolds, Hello is the one the most notoriously shitty videos of all-time. Maybe you don’t concur but come on— teachers singing imagined love songs to students you teach isn’t a good look.

You don’t think Mr. Reynolds was a stalker? Check out this video I found on Youtube by some dude named Mario Wiennrroither showing Richie singing with the music completely gone. It’s the most wonderfully disturbing thing I’ve ever seen.

Wow, I’ve spent way too much of my allotted space discussing this sinister music video.

Fortunately this isn’t a 80’s MTV video countdown because Hello is among a small handful of the greatest songs from this era.  From its February of 1984 release as a single through today, Hello has never said goodbye to pop ballad glory. It’s a gentle song—one still a staple at hotel elevators, doctor offices and phone hold features all over the world.

Putting the palpable sappiness aside of Hello, it’s one of pop music’s great unexplained marvels of the 80s—- how a song so deep-rooted in cheese still had the ability to wallop music lovers of all genres directly in the gut.  Yes, I did say ALL music lovers. I remember rocker dudes and hippies alike belting out “Hello, is it me you’re looking for” like they wrote the tune themselves.

Hello was the prime souvenir on Richie’s Cant Slow Down album— one of the most influential 80’s albums, expertly crafted with other smash hits like All Night Long, Penny Lover, Stuck On You and Running With The Night.

By the way, credit Lionel’s wife, Brenda for this cheeseball masterpiece coming into our lives. According to Songfacts, Richie wrote this but left it off his self-titled first solo album. His wife loved it and was adamant it landed on Can’t Slow Down.

There’s a not a person who grew up in that generation that can’t name Hello in three notes or less. It’s a tasty slice of 80s cheese I unrepentantly still have in heavy rotation on my playlist.

Chart Success: Hello reached number-one on the Billboard Hot 100, where it stayed on top for two weeks before Denice Williams’ Let’s Hear It For The Boy knocked it off. It stayed on the charts for 24 weeks and finished 1984 ranked seventh on the year-end Billboard Hot 100.

Great Lyrics: Richie has long said in countless interviews his one detriment to this song is people constantly approaching him with the  “Hello, is it me you’re looking for” line.

“I’ve been alone with you inside my mind
And in my dreams I’ve kissed your lips a thousand times
I sometimes see you pass outside my door
Hello, is it me you’re looking for?
I can see it in your eyes
I can see it in your smile
You’re all I’ve ever wanted and my arms are open wide
Cause you know just what to say and you know just what to do
And I want to tell you so much, I love you”

Fun Fact: Lionel Richie was a hit making stud in the 80s.  Counting Hello, Richie had a mind blowing dozen top 10 hits in the decade including four number-ones: Hello (1), Say You Say Me (1), All Night Long (1), Truly (1), Dancing On The Ceiling (2), Stuck On You (3), You Are (4), My Love (5), Ballerina Girl (7), Running With The Night (7), Penny Lover (8) and Love Will Conquer All (9). He was also instrumental in creating USA For Africa’s We Are The World.  Still, Richie’s biggest triumph was Hello anchoring his Can’t Slow Down album — the biggest-selling album in Motown history and winner of Album of the Year Grammy in 1985.