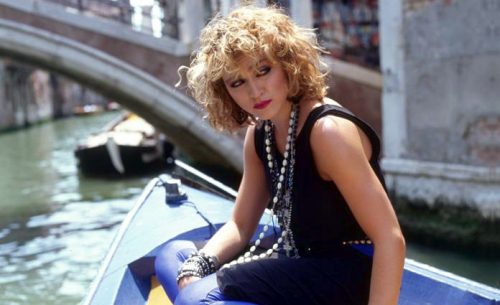 Madonna’s been a mainstay in the music scene four decades (sorry for making her sound old) strong but her most dominant remains the 80s, where she along with Whitney Houston ascended to become the leading female titans of the industry.

This is Madonna’s fifth and final appearance in the countdown—the most of any solo artist or group in my MoranAlytics countdown. Like A Virgin joins previous entrants Papa Don’t Preach (No. 96), Borderline (88), Like a Prayer (84) and Crazy For You (47).

I’d say Madonna represents the best of pop-dance of this (and other) eras, but she’s more than that. She literally transcends pop-dance. While other preceding hits made her a star, Like a Virgin propelled her towards icon status.

Madonna’s desperation for superstar status essentially had no limitations in the 80s, and never is this more evident than Like a Virgin. She proved sex really does sell, as her video was suggestive yet still comparably mild to her famous MTV Video Music Awards performance in 1984.

Naturally, I was mesmerized by her singing and sexuality.  I enjoyed many hits of hers during this time but confess some of her earlier music hasn’t aged particularly well for me— afflicted from some type of 80s novelty gloss. That’s not the case with Like a Virgin – this tune is timeless. It’s one of those songs where the pristine vocals match the melodies effortlessly.

It’s probably not the most masculine proclamation to make, but hell, I’m doing it anyway. This is my favorite Madonna tune—not just for the song but also the raging hormones the 13-year old  in me could handle from watching the video (over and over).

By the way, this song was so good it propelled Weird Al Yankovic to a new level of stardom when he parodied it with “Like a Surgeon.”

Great Lyrics:  “Madonna is Italian for “My Lady”, which is another name for the Virgin Mary. Madonna singing Like a Virgin caused a stir with certain catholic groups although in fairness to her, Madonna had absolutely nothing to do with the writing of it.

Fun Facts:  Major shout out to a songwriting tandem that frankly I’d never heard of before researching this countdown, Tom Kelly and Billy Steinberg.  Not only did they pen this song, but they’re also responsible for writing fellow 1980s  number-one hits True Colors (Cyndi Lauper), Alone (Heart), So Emotional (Whitney Houston) and Eternal Flame (The Bangles).