Be patient, wing fans because there’s a lot to unpack with this review than any other. Of all the wing joints in Western New York I’ve tried and with this posting we’re closing in on 60, Wingnutz in Kenmore presents the undisputed biggest conundrum yet. It’s located literally inside the Knights of Columbus and is unlike any setting for wing purchase I’ve seen before.  The dining area is essentially what you see in a large company break room, with six conference tables and eight chairs at each table, meaning busy nights will result in you likely dining in with strangers.

It’s a husband and wife owned operation and maybe the most charming place I’ve ever been to for wings. However, ambiance plays but a small role in the chicken wing review/quarterback comparison game.  It’s all about the wings, baby.

My buddy and I went with 10 medium and 10 cajun and waited (and waited—and waited) to dig in.

So, how were they?

PROS: The pros are as prevalent here as any wing in Western New York.  Both the medium and Cajun sauces tasted majestic, particularly the medium. Unless your hobbies include torturing your taste buds with nuclear heat you won’t need hot here—Wingnutz medium gives you every bit of spice and heat you need and more. Also, the wings are gargantuan sized. I went with a friend equally hungry as I and we labored big time getting through a double order.

Lastly, they were cooked to near if not complete perfection and the interior was tender as can be.

CONS: In fairness I was told when ordering what the wait would be, which gave me the option to go elsewhere but I must say, waiting a full hour to eat is a problem. Most places are around 20 minutes and if  packed you can double that, but over 60 minutes to wait is rough, especially if really hungry.

Also, it didn’t happen while I was there but they did flirt with running out of wings and apparently this happens semi-regularly. In a way it’s a fun marketing gimmick, making people feel they better get there before they’re gone but it could also detour me from wanting to go if unsure if my ride will be wasted.

Lastly and for some this is unavoidably huge—the wings are breaded. I’m generally not a fan of breaded and while I maintain an indifferent approach or can even be swayed (more on that in a minute) there’s percentage of wing enthusiasts that won’t touch breaded wings with a 10-foot poll.  The criticism and a fair one is breaded wings are essentially fried chicken with wing sauce.  Directly tied into breaded wings is sauce verging on drowning the wings to prevent the breaded wing taste. I’m a huge saucy wings guy but the amount of sauce here is on the brink of overbearing. 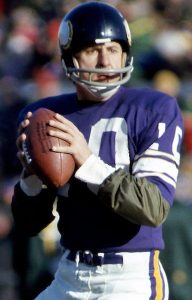 QB COMPARISON:  Fran Tarkenton. Uniquely talented and exciting not to mention a Hall of Famer.  The one thing he didn’t do was win a Super Bowl.  Perhaps with one or two fundamental changes he would’ve.

RECORD IF WINGNUTZ PLAYED A FULL NFL SEASON: 10-6 but with a few halftime adjustments they can win 12 games easily. The tools are there to be one of the elite in the wing game.

OUTLOOK: First and foremost, not sure I’ve ever wanted to see a small business succeed more. I absolutely loved the environment and vibe of being here and got the opportunity to meet and briefly chat with the owners, Ken and Alysia (apologies for potentially mispelling her name.)  They couldn’t be nicer. They’re the type of people and this is the type of business it feels good to root for and I know I’m not alone— I spoke to several customers who were there for the same reason as myself—positive word of mouth.

As far as the wings, Wingnutz has the potential to be among the truly best spots in Western New York. The sauce is first-rate and wing size is almost unfair to most competition. Good luck finding more bang for your wing dollars.  I’m not sure who’s actually charged with cooking the wings and if it’s a solo or collaborative effort, but they’re made to near perfection.

Let me also say this—these may be the first breaded chicken wings I’ve authentically enjoyed.  The sauce and crisp on the outside coupled with inner tenderness compensated for them in fact being breaded.

But herein lies the conundrum I spoke of at the top. There’s a significant percentage of wing fans who regardless of anything else will not move past breaded chicken wings.  Honestly speaking, it’s a fair critique because I generally feel the same way.

I put a poll up on Twitter less than an hour before penning this review and through the first few hundred voters, quite literally half said they hated chicken wings. In fact, at the time of the posting less than 15% said they actually love them.  Even if that number turns out inflated and two-thirds of wing fans either love breaded or at least indifferent, that’s still a third who want nothing to do with your wings. That’s a lot of potential business going elsewhere. 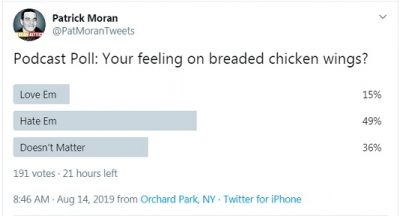 Also, unless you go during a dead period I also think waiting 45-60 minutes for wings is a problem. Generally speaking people go out to eat when on the hungry side. The novelty of Wingnutz is cool but novelties get old quick and I’m thinking people generally don’t want to wait an hour to eat. Lastly, I get Wingnutz orders their product fresh daily but running out kind of sucks and I wouldn’t enjoy feeling bothered having to call ahead or rolling the dice driving unsure if I’m going to get eat there that particular night.

Of course, having said all this my gig is critiquing wings not discussing winning business strategies.

So would I recommend this place? Yes, in fact I’d consider you an idiot if you don’t give this place a shot. Cut through the tape, which in some ways is as much charming as a hassle anyway and Wingnutz is fantastic.

I can count on less than one hand the amount of tastier sauces than Wingnutz and that goes double for wing size and the precision to which they’re cooked.

Even with breaded wings I think they’re still in the top 20% of Buffalo wing joints and quite frankly, if they ever make the move to regular ole’ chicken wings while still maintaining the size and borderline unparalleled sauce, they’d be right there with Nine-Eleven Tavern and Elmo’s as the top spot in all of  Western New York.