I’ve had a rough go of the chicken wing game lately.  Previous stops this week at Pour House and Danny’s South produced substandard eating experiences and if I don’t hit on Pappas in West Seneca I’ll officially find myself in a slump. Three straight non-enjoyable chicken wing trips in Western New York isn’t quite the sports equivalent of the Buffalo Bills playoff drought, but it’s pretty freegin close.

The Good: While it ultimately doesn’t really effect how you feel about the food, it’s always a more enjoyable night when you like the bartender.  The bartenders are Pappas were friendly and amiable. The one bartender, I think his name was Dennis was among the nicest guys I’ve seen out anywhere. I’ve reached that old school status in life where banter with the bartender is part of my venturing out experience. Also, major props to Pappas for giving me all flats—something that occurs less than 20% of the time I ask when ordering.  I went there on a Friday but it’s worth noting they have a kick ass 10 cent wing special on Monday, Wednesday and Saturdays (5-10pm) as long as you buy a drink, with a 12-wing limit per person.  Lastly, Pappas is a surprisingly solid spot to watch sports.  They have 11 large TV’s hanging on the walls, including a monster-sized projection TV in the middle for whatever main game is on.

The Bad: I only have one thing but regrettably it’s what matters most. Simply put, the chicken wings weren’t good. While not tiny, the wings are mediocre sized and the taste was slightly rubbery.  The sauce is almost always the make-or-break thing for me and I eternally get medium unless a place has a true a signature sauce.  They don’t (I asked, I got medium and it was among the most lackluster sauces I’ve had yet. Clearly they took Franks hot sauce mixed in some butter and called it a day. No touch of spices to sweeten it and/or give it a little bite, nada. This was the “mail it in sauce.” That’s more acceptable when a bartender is pulling double duty as a cook, but Pappas had a cook on duty. I’ve said several times I’m a sweater when eating wings that have a little kick. Well, there wasn’t a single bead on my forehead after eating all 10 wings.

I can keep going but surely you’re bored at this point, just like these wings bored me. Sad! 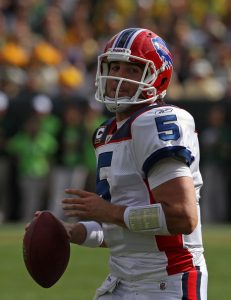 QB Comparison: Pappas are the Trent Edwards of chicken wings.  As much as you wanted to get behind the dude he couldn’t get it done and to make matters worse, never took any chances. I feel the same way about the Pappas wing sauce.

Recommendation: If you’re going out with a friend(s) to have a few cold ones, watch the game and get wings to compliment the night (while they’re on special) I absolutely recommend this spot.  However, if you’re hungry and looking to build your trip around wings that’ll hit the spot perfectly, I can’t in good conscious recommend eating here, especially when Duffs is just a short walk up the road.  Pappas is a good place with good bartenders, people and prices—but the wings are pedestrian at best.

Just like I feared at the top—I’m 0-for-3 this week and now in a wing slump. Help me out, Sal’s Lounge in Depew because you’re next.