Even If I’m not a big fan of chicken wings at a particular place I make it a point to find some positive things to say about the experience.

It’s a more arduous task this time around.

My unceasing voyage to outgrowing every piece of clothing I own led me to Danny’s South on Abbott Road in Orchard Park on Thursday night.  While there’s several joints far more reputable in the chicken wing game I’ve yet to visit, I chose Danny’s South for two reasons.  One was my cousin Colin living nearby and willing to meet me out for some eats and conversation of which I always enjoy having with him.  Secondly and if we’re being honest here, more importantly was multiple signs hovering around that unmistakably advertised 30 cent wings. I mean, who the hell am I to be on a chicken wing binge and not take advantage of that deal, right?

If there’s one thing I hate is advertising that doesn’t tell the whole story. I mean I’m trying to get a deal on some chicken wings, not sign a two-year contract with Verizon Wireless. Just give me some chicken wings at the price you blatantly advertise with no strings attached. Half-truth advertising incenses me.

While staying in Buffalo I drive past Danny’s South to and from my office daily. While passing I noticed several signs that read 30 cent wings Tuesday-Thursday.  It doesn’t mention, not even in any fine print any drink minimum.  It certainly doesn’t say anything about paying extra each for blue cheese or celery. The reality is you have to buy two drinks to be able to order 10 wings at 30 cents per, and a single blue cheese is $1.00, as is a skimpy handful of celery pieces—which by the way they don’t tell you there’s a charge for that until you get a receipt.  They also drill you for $2.75 for a diet coke with no refills— even if you’re sitting at the bar.

Essentially if you’re a non-drinker and want wings with one blue cheese and a few sticks of celery you’re paying around$12.00.  That’s not expensive by any means, but it doesn’t really sound like much of a special anymore, does it?

Don’t bother saying it’s not common either. I don’t give a shit. Shame on any and all establishments that have drink minimums not included in their advertisement. Implement a policy that you need to be blacked out drunk to get 30 wings free if you want—just have that shit on your posters so people know what they’re getting into beforehand.

Four nights ago I went to Pour House in Hamburg for 50 cent wing night, got a small diet soda at the bar and my total bill was $6.00. Imagine that—charging what your ad says with no strings attached.

I’m cognizant of this being a lot of bitching over what’s essentially a small handful of dollars and has me coming off like a cheap bastard,  but I can’t stress enough how much extremely misleading advertising gets under my skin.

Price and policy controversy aside, a really good chicken wing would’ve annulled any angst over feeling hoodwinked by any Danny’s South sham advertisement.

To their credit, I ordered my customary medium saucy and not very crispy (I don’t emphasize “not crispy at all” anymore) and they delivered in that regards. The wings had plenty of sauce and they weren’t rubbery but not crispy either. However, when I tried to ask for as many flats as possible I was cut off before I could even complete that sentence and told no, which is fine. Very few places have given me all flats. But I feel like the bartender punished me for even inquiring because my order wasn’t flat-friendly at all. In fact, there were actually more drums than flats and yes, I am the jerkoff that counted them.

It doesn’t get better from there.  I prefer medium sauce with the hope if not expectation it’ll be not too hot but teeter on the edge of it.  I don’t need my head sweating like a shower immediately after is necessary, but I’m at least trying to get a little glisten on my dome when eating wings.  This sauce had precious little kick and felt closer to mild than hot. Lastly, I wouldn’t brand the wings as tiny but calling them generous would equally be a stretch. These wings were at best welterweights.

Honestly when you combine everything, most importantly of course the wings, I’d be lying if I said this place wasn’t in the conversation for worse I’ve had yet. 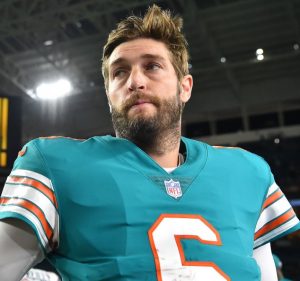 It’s worth noting Danny’s South has a nice sports bar feel inside, a great reputation for other food (wings are clearly not their signature dish) and they do have some kickass memorabilia hanging up to enjoy.

QB COMPARISON: To use my standard quarterback comparison, Danny’s South is the Jay Cutler of chicken wings. There’s definitely curb appeal but before he leaves you’ll regret him ever signing with your team.

Almost directly across the street the Big Tree had wings for 50 cents each. I choose Danny’s because I’ve already had Big Tree and wanted yet another new place under my belt.

It was a regretful choice.

RECORD IF DANNY’S SOUTH PLAYED A FULL NFL SEASON: 2-14 with a lot of snooze fests along the way,