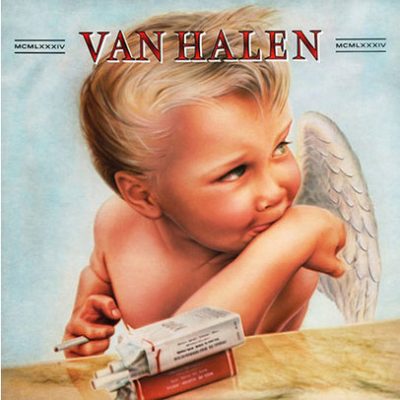 Why I Loved It: Admittedly I’m not a huge Van Halen fan on the whole,  or at least I didn’t think I was, but this is Van Halen’s second album to make my countdown (Ou812 started things out at No. 100.)  1984 is, without question their best album and one of my favorite rock albums of the entire decade. Van Halen has always been about huge rock songs you crank at a party, and their hooks on the 1984 album are catchy as hell. Their formula to success wasn’t exactly an industry secret—- hard riffs, memorable Eddie Van Halen solos and David Lee Roth over the top antics as a frontman. “Jump” came in at No. 31 on my Favorite 100 Songs of the 80’s countdown last year. The keyboard intro is one of the 80’s most memorable musical moments. Van Halen really took advantage of the MTV video emergence.  “Jump” and especially “Hot for Teacher” were MTV mainstays. In an era where so many rock songs were dated and fell apart as they aged “Jump” is still a song that resonates today. “Panama” and “I’ll Wait” put this album over the hump as one of my favorites of the 80’s.

My fondness for Van Halen ended when Roth left after 1984 but that doesn’t take away from this being a true 80’s rock gem.

Commercial Success:  The group’s sixth studio album, the last to feature David Lee Roth as lead singer turned out to be the group’s most successful. 1984 didn’t quite reach number-one on the Billboard Top 200—it had to settle for two and stayed there for five weeks thanks to Michael Jackson’s Thriller. “Jump” reached the pinnacle as a single, becoming the first and to date only Van Halen single to ever hit number-one on the Billboard Hot 100. It spent five weeks there before being knocked off by Kenny Loggins’ “Footloose” and finished ’84 ranked sixth on the year-end chart. “Panama” and “I’ll Wait” both peaked at No. 13 on the Billboard Hot 100 while “Hot For Teacher” only reached No. 56 despite being one of the sweetest MTV videos of all-time.  In total 1984 has sold more than 10 million copies in the United States.

Fun Facts: From wowamazing.com here’s a few facts about Van Halen and this album: “Eddie Van Halen was on the Rolling Stone cover in 1995. During that interview, he claimed David Lee Roth rejected the very famous synth riff for “Jump” for two years before finally agreeing to write lyrics to it. The cover of the 1984 album features a smoking cherub. It was censored when released in the UK. A sticker was placed to cover the cigarette in the cherub’s hand and the packs of cigarettes visible on the album cover. In the original release of the album, all song credits were given to Edward Van Halen, Alex Van Halen, David Lee Roth, and Michael Anthony. In the UK single for “I’ll Wait” Michael McDonald was credited as a cowriter, but he was not given the same recognition in the US version. David Lee Roth can be heard yelling in the video for “Jump.” He did that so he could get his real voice onto the music video.”