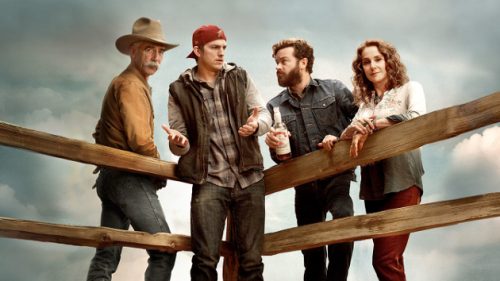 (WARNING: Many Season four spoilers are included here, so if you haven’t yet watched the latest batch of The Ranch episodes and/or plan to do so anytime soon, you definitely want to skip this post and follow my scintillating countdown of the Favorite 100 Albums of the 80s or another topic from my stable of masterpieces instead.)

Because my existence isn’t exactly what I’ll call exhilarating, I just binge-watched Season four of The Ranch, an adult sitcom on Netflix I’ve enjoyed apparently more than most, as reviews I’ve read over the past few years have ranged from lukewarm to downright shitty.

While I don’t think this latest batch of 10 episodes as a whole was quite as good as the first 30 I’m intrigued enough to probably continue watching, seeing the show’s already been renewed for two more seasons worth as of this posting.

First and foremost I’ll start by stating my shock to see Danny Masterson (Rooster on the show) still appearing, as he’s in the middle of rape allegations accused by an ex-girlfriend and was fired from the show as a result. However, he was fired on December 5th and the latest episodes were released on December 15th. Because he plays such an integral role Masterson was still featured in all 10 episodes.

While it certainly wouldn’t have been fair to cancel airing the season and penalizing the work of many others because one actor is allegedly a piece of shit, the problem schematically is the latest season ends with no obvious write-off of his character; leaving the writers a conundrum on how to incorporate a potentially unexplainable sudden disappearance when the next season picks up (more on that in a few).

♦ Whether it’s family oriented networks like CBS or adult minded Netflix, most sitcoms tend to be predictable and this latest season of The Ranch was annoyingly no exception. From the second Abby interviewed for a teaching job in Denver I never a doubt the season would end with her getting the gig “against all odds” with ensuing conflict between her and Colt.  Ditto for the gas pipeline deal and their desperately needed payday falling through at the last minute after the brothers essentially already spent it (which may end up helping explain no Rooster going forward).  While I knew Abby’s teaching gig and pipeline deal implosion were locks, I was hoping for at least one noteworthy surprise and nothing stimulating came about. It was revealed that Colt’s ex-girlfriend Heather lost the baby but all that did was explain the previous season’s cliffhanger and Heather wasn’t heard from again after her one-time, five minute scene. I figured maybe she’d emerge as a love interest for Colt again, with Abby bolting but nope—at least not now that’s all she wrote for Heather.  Literally nothing about this season had me thinking to myself, “holy shit I never saw that coming.”  Sad!

♦ Beau (Sam Elliott) was hands down the MVP of season four. He didn’t have nearly the amount of focal plot points as previous seasons but did suffer a heart attack near the end, realizes he loves Joanne while he’s seeing someone else (Mary), and shows he still has deeply rooted feelings for his ex-wife Maggie when she helps care for him (along with Joanne) following his health setback.  Hell, Beau even shows a (very) rare tender moment by hugging his sons before going in for a cardiology procedure.  Elliott was as funny and pricky as ever, and his scenes often stole episodes. I’m not even sure this show would be watchable if he weren’t around.

♦ I tried to focus on Rooster’s character but honestly spent most the season wondering when Masterson was getting written off already knowing he was fired.  It wasn’t until the final scene of the last episode I learned his firing couldn’t go into effect until next season. For what it’s worth I thought his character was typical of the first three seasons. If you already liked him you still would and vice-versa.

It’s a shame to see his role on the show and quite possibly his career end but if he’s guilty of what he’s accused of then fuck him, it’s well deserved.

♦ Abby wasn’t very likable in season four. I mean, Colt’s doing everything he can to provide for and make life easier after your school closes down and you lose your job. He’s balls deep, all-in on purchasing another ranch—with money you helped fund.  For me, it’s kind of a twatty move to go accepting the job in Denver six hours away without so much telling him before his mother—yes he learns of this from his mother at the bar.  I can get over not telling Colt immediately, but then they predictably get into a fight and she ultimately leaves for Denver in the finale without even saying goodbye!  Oh, I should probably mention they got engaged early in this season yet Abby’s father still hates him.  I’m starting to think your boy Colt should’ve chosen Heather.  Abby’s a bitch, yo.

♦ Speaking of Colt, my Twitter mentions take a beating when saying this but I’ll yell it to the roof top — Ashton Kutcher has far better acting chops than given credit for. We all know he’s relatively funny but his dramatic side can be captivating to.  For me the best scene of the entire season is when a shaken and hostile Colt blames his mother for his father’s heart attack during a heated argument. I found it intense and got me having all the feels.

♦ Sticking with his mother Maggie, she returns in episode seven. Yeah, I don’t really care either.

♦ While on a whole I thought the season was consistently funny with a sneaky amount of drama mixed in, I hated the finale—fuckin’ hated it.   After spending the bulk of nine episodes wavering over buying the neighboring ranch, which would take risking all their money and perhaps the future of their own ranch, Colt convinces his brother and dad to pull the trigger.  However, Beau’s heart attack see him change his mind, at least temporarily and he refuses to sign off without seeing the land first. Up against a deadline to get the deal done and his father in the hospital, Colt learns through the mushroom-loving town lawyer that Rooster holds power of attorney of his dad’s finances (even though he’s not dead?).  Colt convinces Rooster to go behind Beau’s back and sign the papers on his behalf, giving them ownership of the ranch without Beau’s knowledge.  They agree to purchase the land with the understanding that the big pipeline pay day is soon coming, but of course that falls through at the last second because of protests and the Bennett Boys are essentially fucked. There’s not a single solitary second in the first 39 seconds that leads anyone to believe Beau wouldn’t lose his shit and disown his sons if not outright kill them for going behind his back like they did, yet they do it anyway.  Couple that with Abby skipping town and I’m left semi-pissed off for spending roughly nine and half episodes of watching a quality show end with a tiresomely stupid cliffhanger.

♦ Lastly, if there’s one silver lining in what for me was a thoughtless finale is that it probably paves the way for Masterson’s complete exit.  I suspect the angle will be either Rooster being scared shitless at what his father will do when he finds about the power of attorney and subsequently bolts town before Beau returns, or they time forward enough for Beau to return home and completely exile Rooster because he used said power or attorney without asking. I think the latter would be an insult to the knowledge of viewers, as Rooster was exiled from his father’s ranch business before but still didn’t leave town.  I think the former happens and maybe they learn he somehow dies after leaving.  Regardless, Masterson’s exit is clearly permanent and I can’t imagine they’d even think about replacing Rooster’s character with another actor.

Then again, this is the world of sitcom and not exactly the most thought provoking one at that.

Conclusion: I’m probably doing an awful lot of bitching for someone that actually likes the show and mostly appreciated this latest season.  Had the final 15 minutes not been so utterly predictable I’d be raving to anyone who’d listen.  I enjoyed Season four enough to stick around for five when it rolls around but was left wanting more this time around—and also  thinking Abby’s a bitch who doesn’t deserve Colt. If she’s supposed to come off as likable they’re dropping the ball.  MORAN-ALYTICS GRADE: C+