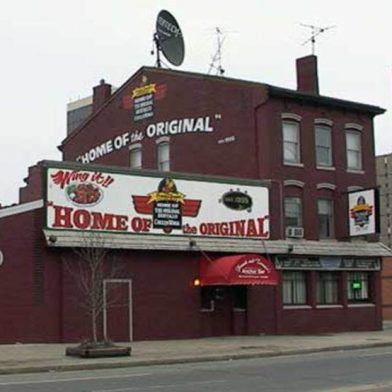 The first time I had Anchor Bar wings a few years ago I enjoyed them a lot. So much, in fact that I had them Power Ranked in my Top 15 and also ahead of Duffs.  To say that caused a shit storm in my Twitter mentions is an understatement, but I don’t care. My chicken wing consumer standards are unbiased and I refuse to succumb to general popular opinion.  Because of that controversy I ultimately, recently in fact had them a second time.  Did they live up to my initial experience?  Let’s find out.

PROS: I respect pioneers and when walking into Anchor Bar I can feel the rich tradition of Buffalo chicken wings (I hate using the term Buffalo with them) as well as the presence of so many influential people who’ve ate there. In that regards Anchor Bar is like Wrigley Field or Madison Square Garden—the mecca of chicken wing joints.  My first time there I had medium wings and enjoyed them thoroughly.  They were tasty, cooked well and enjoying some live jazz music in the background was a pleasant bonus.  Western New Yorkers generally bash the place because we know of several better options yet still hear and see national folk still bring up Anchor Bar as Buffalo’s go-to spot.  Relax, hometowners.

CONS: Absolutely maddening inconsistent. Of any place I’ve ever wings from more than once I’ve never had a bigger eating experience discrepancy.  My first time, described above was well prepared and pleasant.  My second was literally among the worst I’ve had.  I got a double order split with someone else, half medium/hot and other half BBQ. They were both smothered with sauce (which to be fair I often enjoy) and the wings were rubbery. I mean, like literal rubber.  I’ve enjoyed wings from Tops or Little Ceasars more than what I got here the second time around.  Because of its notoriety beyond Western New York, Anchor Bar is awfully overpriced and you’re probably going to wait longer to eat than you want to. 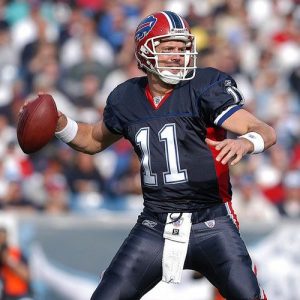 QB COMPARISON: Drew Bledsoe.  Perhaps the second-most famous quarterback in both Patriots and Bills history, Bledsoe was a huge name with a huge arm and constantly a huge topic of conversation in NFL circles among his era’s best quarterbacks.  But was he really THAT good?  Drew had a 98-95 career record and just a 77.1 quarterback rating yet still made four Pro Bowls.   Bledsoe wasn’t bad and certainly deserved respect but there were far better quarterbacks throughout his NFL career. In other words, dude was kinda overrated.

OUTLOOK: I’m an old school type of guy who respects what came before me.  Anchor Bar’s an O.G. on the chicken wing circuit and it angers me when people forget that.  Sure, there’s better alternatives, but don’t shun someone who’s meant so much to the scene.  Bruno Mars may be a better singer & performer than Smokey Robinson (arguably of course), but is Bruno famous without Smokey paving the way?  That being said, Anchor Bar’s a commercial place seemingly more about style than substance. They now have a location in Williamsville as well as the airport and I can’t imagine the quality is getting better anytime soon.  Respect the tradition but know there’s (far) better options. I originally had them ranked higher than Duffs.  They’re not—but neither is a Top 10-15 spot in Western New York.