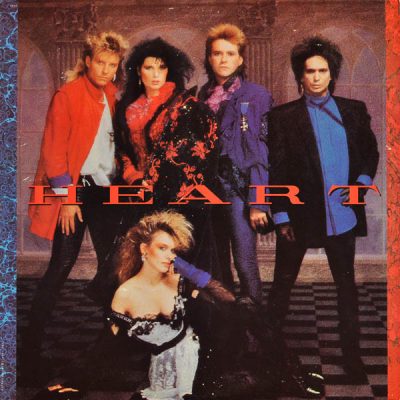 Why I Loved It: As I got older one of the things that bothered me about long time Heart fans is their accusations that the group became “sell-outs” with this album.  I feel like music is constantly changing and evolving and while this was obviously more radio friendly than most of their previous efforts, I have a no problem with a band, a Hall of Fame band mind you, grasping for radio and commercial success when the time was right.  The mid-80’s were a very upbeat time for music with synthesizers and funky keyboard grooves ruling the scene.  Sure, the hit singles on this album were more AOR than normal for the group, particularly “Never” and “These Dreams” but they still rocked out plenty.

“Never” is such a solid jam with such an irresistibly catchy chorus. “What About Love” is the mid-80s poster child for the MTV era. “These Dreams” was a slower tempo song that sneakily does a little heartstring tugging.  This was a great, great album.

Commercial Success: It took eight tries in the studio but Heart finally broke through with their first and to date only number-one Billboard Top 200 album. In total the self-title album would spend a mind blowing 92 weeks on the charts. “These Dreams” was the first Heart single to hit number-one on the Billboard Hot 100, supplanting “Sara” by Starship and finishing 1986 ranked 33rd on the year-end Billboard Hot 100.  “Never” peaked at number-four on the Billboard Hot 100 and stuck around the charts enough weeks to finish ’86 ranked 18th on the year-end chart. “What About Love” climbed up to No. 10 on the Billboard Hot and reached as high as three on the United States Mainstream Rock chart while “Nothin’ at All” was the band’s fourth top single from the album.  In total the album sold more than five million copies in the United States and was nominate for a Grammy for Best Rock Performance by a Duo or Group with Vocal.

Fun Facts: From Songfacts.com: “Up to the (self-titled) Heart album, the band wrote most of their own songs. In 1985, they signed with Columbia Records and got help from some experienced songwriters. This (These Dreams) was one was written by Bernie Taupin and Martin Page. Taupin is most famous as Elton John’s lyricist, but in the mid-’80s he wrote two lyrics outside of Elton’s orbit. He chose Martin Page to compose the music because he was impressed with Martin’s group Q-Feel, which had a popular song in Los Angeles called “Dancing In Heaven (Orbital Be-Bop).” The first song Taupin and Page composed was “We Built This City,” which was a #1 hit for Starship. The second was this one, which was originally titled “Boys In The Mist.” Taupin wrote the song for Stevie Nicks with a dreamlike feel typical of her work. She turned it down, so Page composed the music and changed the title.

Nancy Wilson sang lead on this track. Her sister Ann typically handled lead vocals, but when they heard the demo the group thought it suited Nancy’s voice. Nancy had a nasty cold when she first recorded her vocals, but their producer Ron Nevison liked some of the raspiness. When Nancy was feeling better, they recorded more takes in her healthy voice, with Nancy doing her best to re-create the raspy parts Nevison liked.”